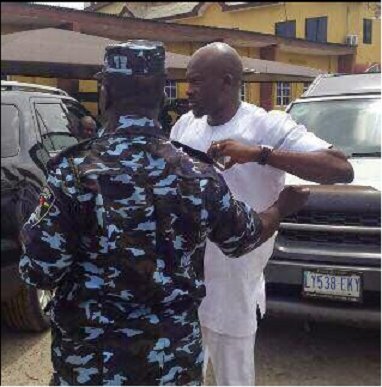 PDP Is A Dangerous Terror Organization: Its Officials Lack Legitimacy

It is certainly not the first time you will be reading this allegation but hopefully it will soon be the last. Nigeria must do what is necessary including at international levels to disband this dangerous, monstrous cult and have its coordinators and financiers incarcerated. The PDP is the most dangerous official terror empire in Africa today.

Every candidate and official of the PDP today is potentially a terrorist, being signed-up as a contributor, proprietor and promoter of this open terror operation.

The PDP operates by inflicting all forms of terror on the people towards maintaining a hold on power hence the sobriquet, “People Desperate for Power.”

Let’s quickly refresh what we used to hear about this terror organization so we better appreciate where we are today:

Nobel laureate Wole Soyinka as far back as 2004 allegedly recognized it as and classified the PDP since then as “a nest of killers.”

MEND leader, Henry Okah in 2010 after the Abuja bombing accused the PDP president, Goodluck Ebele Jonathan of orchestrating that and another deadly bombing in Bayelsa.

In October 2012 the PDP Vice President, Namadi Sambo and the Attorney General of the federation, Mohammed Bello Adoke were accused, as reported in the Vanguard, of links with Boko Haram leadership and involvement in acts in concert with the terrorist group to subvert electoral processes. They were never formally interrogated.

Former PDP chairman, Bamanga Tukur in May of 2012 said “Boko Haram was fighting for justice and was another name for justice.” He remains a PDP government appointee.

Late National Security Adviser Andrew Owoye Azazi in 2012 accused the PDP of being behind Boko Haram terror group responsible for as many as a hundred thousand deaths in Nigeria. He was fired by the PDP government for saying this and died under suspicious conditions in a helicopter accident the same year. [SEE: Jonathan Warns NSA Azazi Over Anti-PDP Comment-SaharaReporters; April 28, 2012]

Fast forward to the present time:

The six-week successful campaign against Boko Haram left no doubt in Nigerians and foreign observers’ minds that this PDP government was encouraging and complicit, to say the least, in Boko Haram terror — seeking to use this as a crises to alienate the opposition (until Stephen Davis exposed group sponsors and the plan crumbled).

Nigeria’s president has himself confessed since 2012 that Boko Haram sponsors were his friends that he knew, but since then he has aided and abetted the terror organization by concealing these notorious persons.

This Means All PDP Officers Today Are Implicated In Terror

Therefore, all PDP senators, representatives, governors and governorship candidates who have promoted this party known for its support of terror are indirectly co-conspirators in Boko Haram terrorism.

Their support for Boko Haram, and the president who is clearly a reckless terror facilitator, among other things has caused a lack of moral consciousness in these PDP officials and left them able and ready to apply all forms of terror on the masses including by hiring MASSOB, MEND, OPC, Boko Haram and all other terrorist organizations to unleash these on Nigerians in seeking the subversion of the democratic process in their (PDP’s) favor.

We saw in Lagos with the Lagos governorship candidate in full support, the unleashing of OPC on the people; terror in full glare.

We are likewise seeing terrorists of all affiliations being unleashed on polling centers across the nation by these terrorist candidates and the associated government officials like the current NSA, the Nation’s Attorney General and the army Chiefs in cahoots with politicians of the PDP terror organization. We are also witnessing these people bribing INEC officials and RECs in broad day light in attempts to subvert electoral results.

From Rivers, through Akwa Ibom to Adamawa where the Ribadu brothers have been caught hiring thugs to disrupt the electoral processes in their wards, we see the same picture of a ruthless cult in brazen operation.

#EkitiGate, Jide Obanikoro driving during a vehicle curfew and intimidating voters at polling booths, the list of terror atrocities of the PDP this electoral process are too many to mention. We have them caught on tape and video directing terrorists to tamper with the electorate and electoral process. The evidence is limitless.

Terrorism is in the PDP manifesto.

The PDP is not a party but a terror organization and a sickening reminder of a Nigerian past that should immediately be killed and buried.

We propose the disbanding of this terror cult, repudiation for all members and a new beginning for Nigeria. All elected and appointed officials under this terror umbrella should be immediately deposed and thoroughly investigated.

NOTE: We can have one or more strong political parties, this (number) not being what is most important, but rather most essential for Nigeria today is a means of the people immediately retiring inefficient and corrupt officials, be there (they in) one party or one hundred strong ones.