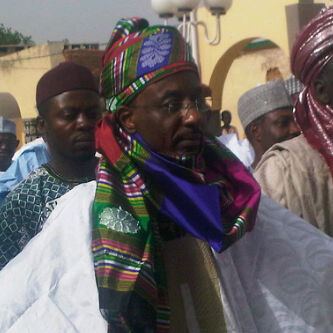 In a move aimed at scoring cheap political point, the leadership of the Peoples Democratic Party on Sunday issued a statement in which it congratulated a new emir of Kano.

Investigations showed that the party issued the statement in haste because it didn’t want the former Governor of the Central Bank,  Sanusi Lamido Sanusi to emerge.

However, the statement, which was issued at 2:32 pm, Nigeria time, turned out to be  completely false as the Governor of Kano State, Alhaji Rabiu Kwankwanso has denied announcing a replacement for the late Emir. Gov. Kwanwaso will make an announcement today (Sunday) according to his aides.

PDP Congratulates New Emir Of Kano, Alhaji Sanusi Lamido Ado Bayero
Says He Is A Gift To The Nation

The National Chairman of the Peoples Democratic Party (PDP), Ahmadu Adamu Muazu, on behalf of the National Working Committee and all members of the PDP nationwide, has congratulated Alhaji Sanusi Lamido Ado Bayero on his emergence as the new Emir of Kano.

The leadership of the party in a statement issued by the National Publicity Secretary, Olisa Metuh on Sunday also praised the Kingmakers for their wise decision in choosing Alhaji Ado Bayero, the heir-apparent to the throne, adding that “in so doing, the Kingmakers have preserved the sanctity of the throne and the confidence reposed in the revered traditional institution.”

The party described the new Emir as “an outstanding nobility who is also highly respected for his wealth of knowledge and experience as well as his statesmanly disposition and commitment to the stability and greatness of the Emirate and the nation at large”.

“Alhaji Sanusi Lamido Ado Bayero is a rare breed. A man of exceptional wisdom and humility. We have a new Emir who, like his father, remains a detrabilized Nigerians with an unshaken belief in the unity and peaceful coexistence of our people as a nation.

“We have no doubt whatsoever that the new Emir will live up to his billing by building on the solid foundation and legacies left by his father to further the greatness of the Emirate where the welfare and prosperity of all are guaranteed”, the statement said.

The party insisted that the new Emir, like his father, is “a gift” not only to the Kano Emirate but to the nation in general. It said Alhaji Sanusi Ado Bayero will bring to bear his wealth of knowledge acquired both in the palace and in the Public Service in discharging his duties as the emir.

Commending the other sons of the late Emir for supporting their elder brother, the PDP charged others who nursed the ambition of becoming emir to learn from the nobility and understand that positions of authority are bestowed only by God and not something to be grabbed through political scheming or by force.

The party congratulated the good people of Kano state and indeed all Nigerians for the successful enthronement of a new Emir of Kano.