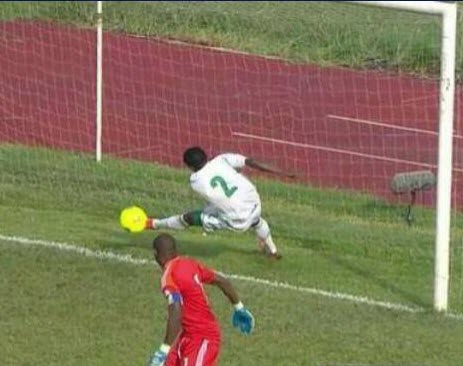 ETHIOPIAN football fans have gone on the rampage in Addis Ababa attacking Nigerian businesses and setting cars on fire in response to what they see as the unfair loss of their national team the Walia Antelopes to the Super Eagles.

Earlier today, the Eagles beat the Antelopes by two goals to one in the first leg of a World Cup qualifier, which gives them the advantage in the two-legged tie.  However, Ethiopian fans feel robbed by the Cameroonian referee who denied them what looked like a clear goal in the 24 minute.

Halfway through the second half, Saladin Said, Ethiopia’s best player, controlled a long diagonal ball well and managed to beat Nigerian goalkeeper Vincent Enyeama only to see Godfrey Oboabona clear it off the line. Video replays shows that the ball had clearly crossed the line but Cameroonian official Neant Alioum refused to give the goal.

To make matters worse for the home side, Mr Alioum awarded a 90th minute penalty against the Walia Antelopes after Ethiopian defender Hailu Aynalem needlessly dragged Emmanuel Emenike down in the penalty area. Nigeria’s leading goalscorer, Emenike then got up and coolly slotted home the decisive winner.

So far, Ethiopia has had a near perfect record in the World cup qualifiers, winning all their home games and thousands of Walia Antelope fans had trooped to Addis Ababa’s national stadium expecting another victory. Following the loss to the Eagles, the anger boiled over into the streets of Addis Ababa.