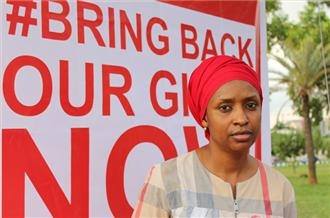 ABUJA – Policemen yesterday, disrupted,  the  protest organized by  #BringBackOurGirls, BBOG,  movement as they distributed  fliers to motorists to remind them of the plight of the 219 Chibok girls still in Boko Haram captivity.

The policemen numbering about 20 barricaded the Shehu Shagari Way, Abuja with their vehicles at the junction to the  Presidential Villa, a move that enraged some of the activists.

The coalition members had initially walked to the National Assembly gate where they condemned the lawmakers for proceeding on Christmas holidays while the abducted girls are suffering in captivity.

According to one of the Co-coordinators of the group, Oby Ezekwesili,  “The lawmakers should be ashamed of  themselves for going on break while the Chibok girls are with wicked men in the bush.”

After spending a few minutes, the group left and as they walked towards the Presidential Villa junction, the policemen in four vehicles quickly drove to the junction and blocked it, to prevent the protesters from heading that way.

This infuriated the #BBOG members, but the protesters were not discontinued as they shared out fliers to motorists.

A member, Bukky Shonibare, who just returned from delivering relief materials to Internally Displaced Persons in Yola, Adamawa State, noted that 98 per cent of the IDPs are not living in government but with private families.

She explained that the displaced persons were suffering, adding that most of them lacked food, shelter and clothing.

“Only 6,500 IDPs are living in government camps, the rest, about 500,000 people are staying with private families in Yola and they are really suffering. We took relief materials to them and they were just crying, they have no clothes, no blankets, some of them sleep on bare ground.