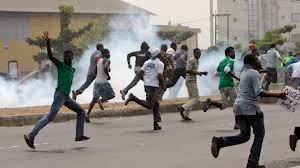 The Human Rights Writers Association of Nigeria (HURIWA), an NGO, on Friday called on the Federal Government to explore the possibility of signing a defence pact with Russia.

HURIWA, in a statement issued in Abuja by its National Coordinator, Mr Emmanuel Onwubiko, said the pact would help Nigeria in tackling terrorism challenges.

Onwubiko said Nigeria should look towards countries in the eastern bloc such as China and Russia for effective and comprehensive mutually beneficial defence pact.

He said since it was becoming increasingly difficult to get the needed help from the U.S. and its allies, it had become imperative for Nigeria to consider other options.

“The solution to the lingering security nightmare manifesting in the seemingly never ending murderous attacks against civilians and institutions by the armed terrorists is to consider defence pacts.

“This problem has caused unrest in North Eastern Nigeria as seen in the unfortunate successes recorded by the terrorists.’’

HURIWA, he said, was therefore calling on leading opposition politicians to stop playing politics with the fight against terrorism.

He called on the All Progressives Congress (APC) to join forces with the ruling Peoples Democratic Party to fight terrorism in the country.

Onwubiko urged the leadership of APC to stop using every opportunity to criticise the actions and programmes of President Goodluck Jonathan’s administration.

“We urge politicians of all platforms and affiliations to provide support to the Federal Government to decisively crush all the violent attacks of terrorists aimed at destroying Nigeria.’’

It faulted the high profile media events in Yola and Abuja, bankrolled by the APC presidential aspirant, Alhaji Atiku Abubakar whose state of origin, Adamawa, was under heavy attack from the militants.
“Such a pact will enable Nigeria to procure the necessary military hardware and needed technical assistance to wage successful anti-terror battles to retrieve all the captured Nigerian territories from the armed extremists.

HURIWA urged the Federal Government to make concerted and pragmatic diplomatic efforts to broaden its scope of international friendship to include the possibility of working out practical defence.

The NGO suggested that a military partnership with either Russia or China would, once and for all, confront headlong the increasing wave of violent attacks by the armed Boko Haram. (NAN)