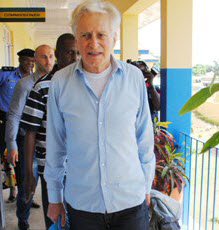 A Frenchman who was kidnapped in Katsina State in December last year escaped from his captors on Thursday and fled to a police station in Zaria, the police authorities said in Kaduna yesterday.

The 63-year-old Francis Collomp was seized in Rimi village in Katsina State on December 19 by gunmen who stormed his residence and killed two people late in the night.

He was working on a wind power project in Katsina when he was kidnapped.

The abductors took him to Kano where he spent nine months in custody before he was moved to another hide-out in Zaria, Kaduna State Police Commissioner Olufemi Adenaike told journalists yesterday.

Collomp sneaked out from where he was detained when his captors were not around.

Showing Collomp to newsmen in Kaduna, Adenaike said the Frenchman was healthy and was returning to France last night.

“Last year, the gentleman in front of me was kidnapped in Rimi, Katsina State and last Thursday he regained his freedom. He was in Kano for nine months and two months ago, he was brought into Zaria and luckily, he was able to escape, got onto a motorcycle and went to the nearest police station which was Danmagaji in Zaria,” the commissioner said.

“My attention was called and I have brought him here for you to see. He is hale and hearty and he does not speak much of English so I wouldn’t want you to bother him and if you look around, you will see that representatives of the French Embassy are waiting to escort him back to France this night.

“We thank God that he has been released, so far we do not know who kidnapped him, and all those details will be worked out later.”
When asked if his freedom was as a result of the efforts of the police, the commissioner said, “God just assisted him and the police covered it up at the end of the day.”

On if ransom was paid, the commissioner said no, adding: “I don’t know if any ransom demand was made and no suspects have been caught and we do not have any idea of those that kidnapped him.”

Journalists were not allowed to interview the man for what the police called “security reasons.”