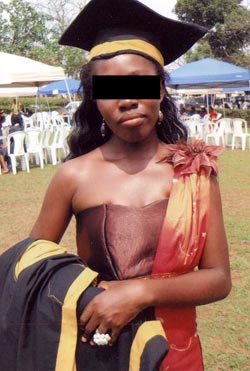 It was a sad end for 22 year-old Deborah (surname withheld), a 300-level student of Benson Idahosa University, Benin-City, after the girl, said to be a virgin, was raped to death by yet to be identified persons in Benin-City, Edo State capital. The rapists cut her throat after the dastardly act. The family of the deceased has appealed to the Police Command in Edo State to fish out the culprits and bring them to book.

Deborah was said to have been raped between 12 midnight and 1 a.m  after she left  hospital and decided to see one of her friends at Upper Adesuwa.  It was then the rapists allegedly caught up with her. Meanwhile, Edo State Police Commissioner, Mr Funso Adebanjo, said the command was investigating the matter. An elder sister of the deceased, Jean, who spoke to Sunday Vanguard, lamented that her sister was killed after she was raped.

*The victim on her matriculation day

She narrated the story: “On Thursday, she came to my house saying she  needed some money but I could not give her. She told me she was leaving but I did not know that she had a plan to sell her Blackberry phone. I think while she was saying that, someone had compassion and asked why she would want to sell her Blackberry for that cheap price. So the person removed his SIM card in one of his phones and gave her the phone. But, somehow, she lost the phone and she had no means of communicating with anybody.

“On Friday morning, she was not feeling fine, so she went to hospital. I got a call from a doctor  who said my sister came there without a family member and that she needed blood. “So I got in touch with my mother; we looked for money and rushed to the hospital. But when we got to the hospital, my sister was shouting and disturbing; so they said we should take her to a church.

“My mother took her to a church. Later that night, she told my mother she wanted to go back to the hospital and she left. I did not know she went to  hospital that night and, when she got there, she kept shouting and disturbing people”.

According to the elder sister, the hospital people were angry with Deborah and, at about 11pm that Friday, she left the Sickle Cell Hospital at Golf Course Road for Upper Adesuwa. “How she walked to Upper Adesuwa that night I just don’t know. There is this friend of hers that also visits us, she went to their house,” Jean said. She continued: “They said she got there and was knocking at the gate but nobody opened the gate. It was when she left the gate that the assailants struck, raped her and slashed her throat. In the morning, her friend started saying  some body was knocking at the gate last night and people said they saw a corpse somewhere outside the street. So they ran to the place and found out it was my sister.

“But at about after 9pm that Friday, the cab driver that carried my sister called me and said he wanted to know how she was doing, but I did not know that my sister even went to  hospital that night. I was in church when my husband called me to say  my sister had accident. It was later he told me that she was dead. We went there and the police came to carry her corpse. On Sunday evening, I went to Ugbor Police Station and made a statement. But why I am worried is that I don’t know why the hospital people will allow her to leave at about 11pm that day.

“The hospital people should produce the man who was incharge  that night.  The police said they want to conduct post mortem and that is  where  we are now. My sister was a 300-level accounting and education student at the Benson Idahosa University and a  virgin for that matter. I am appealing to the police to find the killers. I don’t know why they should allow her leave the hospital at that hour when they knew she was not sound”.