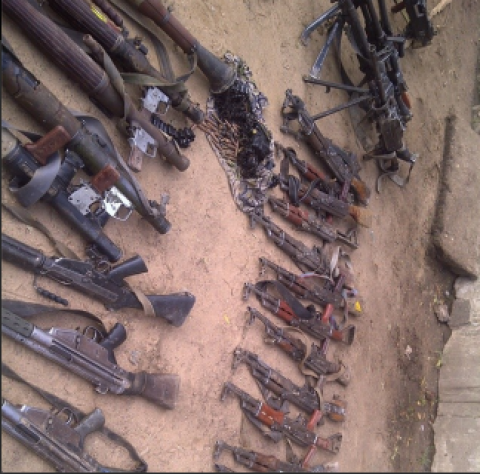 Several soldiers on the ground in Borno State have told SaharaReporters that many Nigerian soldiers are deserting after the military retreated from Biita and Izge as Boko Haram militants mounted a major offensive. Our sources said numerous soldiers had handed in their weapons and deserted in civilian clothes.

On Saturday night, the Nigerian army had routed the Islamist terrorists, killing more than fifty of them and driving them out of Biita and Izge. But our military sources disclosed that Boko Haram returned in full force yesterday morning in a fierce fight that overwhelmed the soldiers. “They [Boko Haram militants] returned to Biita and Izge since yesterday morning with six armored personnel carriers (APC) to attack us,” one of the soldiers said.

He and other sources told SaharaReporters that rampaging Boko Haram fighters, numbering at least 500 and heavily armed, attacked and sacked army bases located in the area.

The soldiers complained about the inadequacy of weaponry and other equipment to confront Boko Haram fighters. Several soldiers revealed that many soldiers deserted their camps after handing over their weapons at the army headquarters in Michika, Adamawa State earlier today. At least 100 soldiers reportedly left through Shua-Mubi Road wearing civilian clothing.

A mid-level officer told SaharaReporters that the Nigerian army had increased operations and aggressively deployed more soldiers in the last week in order to convince the US and other European nations helping Nigeria with intelligence that the military was serious about defeating Boko Haram. “But the issue is that troop morale remains low. The talk from [those in] Abuja has not been met with equal zeal to provide ammunition and logistical equipment to combat Boko Haram,” said the officer.

Some of the soldiers disclosed that Boko Haram fighters have more APCs than Nigerian soldiers on the frontlines.

One soldier wondered why military commanders in Abuja had not mobilized the Nigerian Air Force to take out tanks used by Boko Haram fighters despite the fact that the militants use these tanks in open operations. “Our air force jets can easily locate them and bomb them,” said the soldier, “so why are we not doing so?”