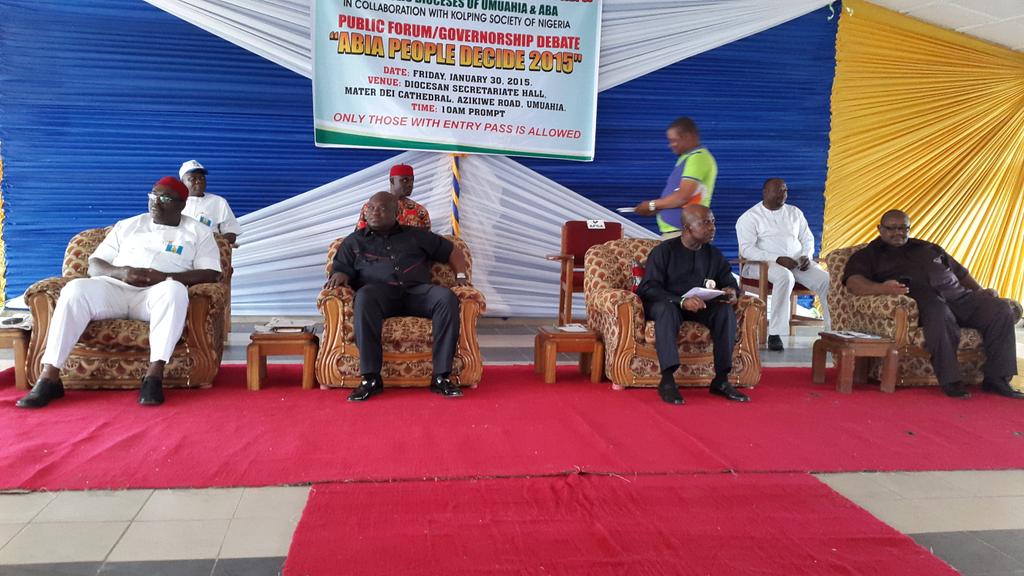 -While the momentum is been built up for the February 28 Governorship election in Abia state, the Catholic Dioceses of Umuahia and Aba in collaboration with Kolping Society of Nigeria have taken the initiative to engage the state’s gubernatorial aspirants in a debate.  The maiden edition was held on January 30, 2015 at the Matei Dei Diocesan Secretariate Hall located at Azikiwe Road, Umuahia. This is a very welcomed development and the United Democratic Party applauds the initiators.

Coming from the background of about sixteen years of inept leadership, the people of the state are in dire need of a rescue operation. Whereas this demand alone is not enough to redirect the bad fortune of the state, there is an equal silent yearning to know, not just mere campaigns promises, but how the promises of aspirants will be realized in at least a 4 year term.

The debate in all its ramification builds platform for issue base discussion and creating a forum for the public to deeply assess the candidates vying for different offices (individual personalities, character and capabilities). With these noble reasons for convening a forum like this, it is expected that all stakeholders in the forth coming election are carried along in the spirit of equity and fairness.

Disappointedly, as in the case of the just concluded debate, it was not so. The organizers of the occasion displayed a height of bias in constituting her discussants. This they did by involving only the candidates of People’s Democratic Party, All Progressive Grand Alliance, All Progressives Congress and the Progressives Peoples Alliance (PPA) . This is undemocratic and grossly unfair.

It is a biased judgment to invite only 4 candidates out of 13 parties fielding aspirants. We see it as discriminatory to invite only those the organizers see as the bigwigs in the race to the government house. This is rather unfortunate. We should note that for the singular reason that a political party takes the bold step, no matter how small, to field a governorship candidate is serious minded and should be accorded the same treatment every other party receives.

Rev. Fr. Okpara in (the Chief convener) a telephone chat pointed out that the venue of the occasion was small, warranting them (organizers) to conduct the debate in batches. He further stated that the subsequent ones will feature same audience and panelist but different set of candidates. The pertinent questions here are: Are there no larger facilities in the entire Abia state that could have served the purpose?  Perhaps, there were no other options; wouldn’t the organizers have constituted a more mixed panel, where an Okezie is interviewed alongside a smaller party’s aspirants? How possible is it to have same audience in two different venues of a key political activity?

With the second phase of the debate scheduled to take place in Aba, and according to plans will field the party candidates that were not involved  in the Umuahia version. The import of this therefore is that, certain group are already scheming their way to the state house. Well, the good news is that power still belongs to Abians and only they will decide who governs in them 2015.

As the elections draw closer, it is important to help deepen our nascent democracy by fostering level playing field where every player has an equal chance to succeed. If indeed the Church must present itself as an unbiased umpire, then, it should  encourage every hard working party in the state to actualize their dream of creating an Abia where our children and children’s children yet unborn will be proud to call their own.

Even as we all look forward to another political debate in the state, United Democratic Party requests that proper arrangement be made for a venue that will accommodate the good people of the state who will love to hear their leaders reel out plans for the state. Restricting attendance might only amount to a futile effort. The discussion does not start and end with the panelists; the focus should be the people.

Also, it should be an unbiased challenge where all candidates for the gubernatorial seat are fielded at the same to convince the people and woo their support. We sincerely hope that by this exercise, the lots of our beloved state will be bettered through an issue based round-table discussion.