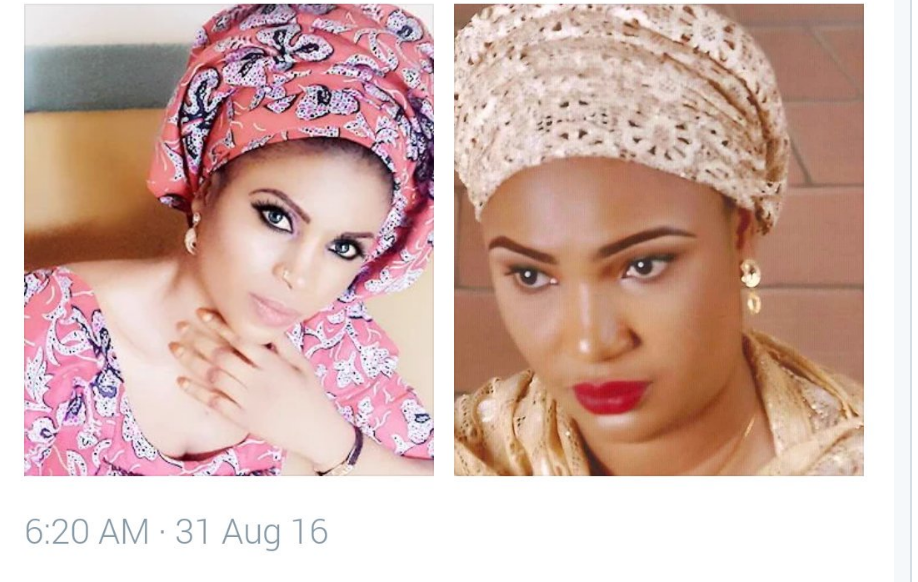 An image was promoted all over the internet today that showed Zain Ameen @zindabo and claimed she was a highway armed robber. The post was easily spottable to be a deliberate slander attempt. A certain Mallam Adamu Hayatu™ ‏@AHayatu, an el-Rufai loyalist was noticed at the center of spreading the maliciously fabricated tale.

Apparently @Zindabo is a known critic of the Nasir el-Rufai Kaduna state government. She is known for criticizing the governor’s projects, sometimes informing the public on the true international sponsors of the projects, as well as for advocating justice for the victims of the Zaria massacre and recent campaign for the Nigerian army to bring back as many as 50 girls allegedly abducted and perhaps raped by the Nigerian army during the Zaria massacre, who have still not been found. 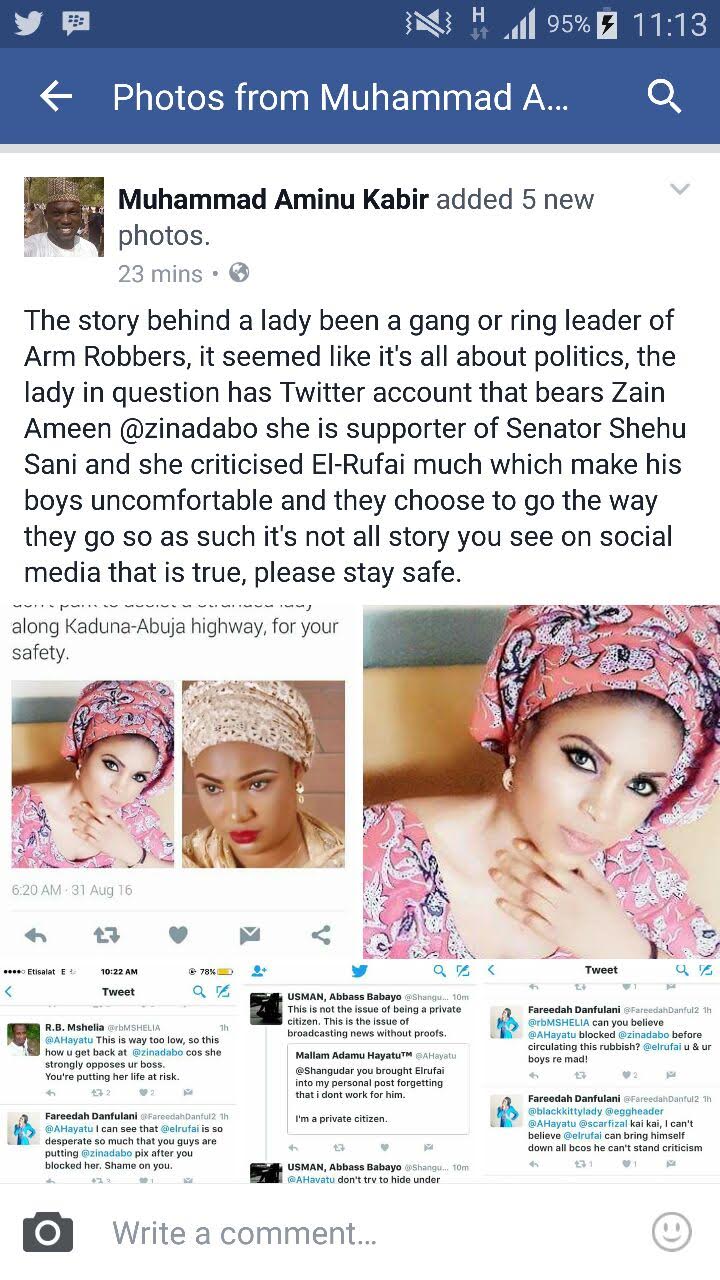 Zain Ameen accused the state governor over the slanderous post about her that made the rounds on social media, saying “I want to sincerely thank those who called my attention to this tweet by an @elrufai core loyalist today.”

Below are some related posts:

Please I don’t have time for you, @elrufai can put my pix on billboards all over kd, I’m unstoppable in sha Allah! https://t.co/OUZZWeJdSk

What has @zinadabo done to deserve this? This is uncalled for. https://t.co/2DB3cgHWRT

When she heard about the slander campaign:

I want to sincerely thank those who called my attention to this tweet by an @elrufai core loyalist today. pic.twitter.com/o0Vprzhc6T

Can you please do a screen shot for me? The @elrufai vulture blocked me before circulating those pix dear. ?? https://t.co/hjyY4IckPG

There’s no justification for the abduction of these girls in their hundreds by @HQNigerianArmy https://t.co/apZcuUuhTR

I will rather be seen sharing radio than being stoned like @elrufai or taking credit for what I didn’t do???? https://t.co/cYuwJOKO4G

This is the second time @elrufai is conniving with people like u to take credit for what he didn’t do. Stop it! https://t.co/mRrCV17fpf

When in doubt ask questions, don’t attempt to give @elrufai credit for what @WorldBank did. It’s very wrong! https://t.co/mRrCV17fpf

—
Here are the posts with the culprits, especially a Mallam Adamu Hayatu™ ‏@AHayatu who spread the slanderous allegation:

They may look ok but they are not, don’t park to assist a stranded lady along Kaduna-Abuja highway, for your safety. pic.twitter.com/9hTuPmBKHi

She’s pretty, petty and evil, a leader in the kidnapping syndicate around Abuja-Abuja axis. pic.twitter.com/l2yuUZARaO 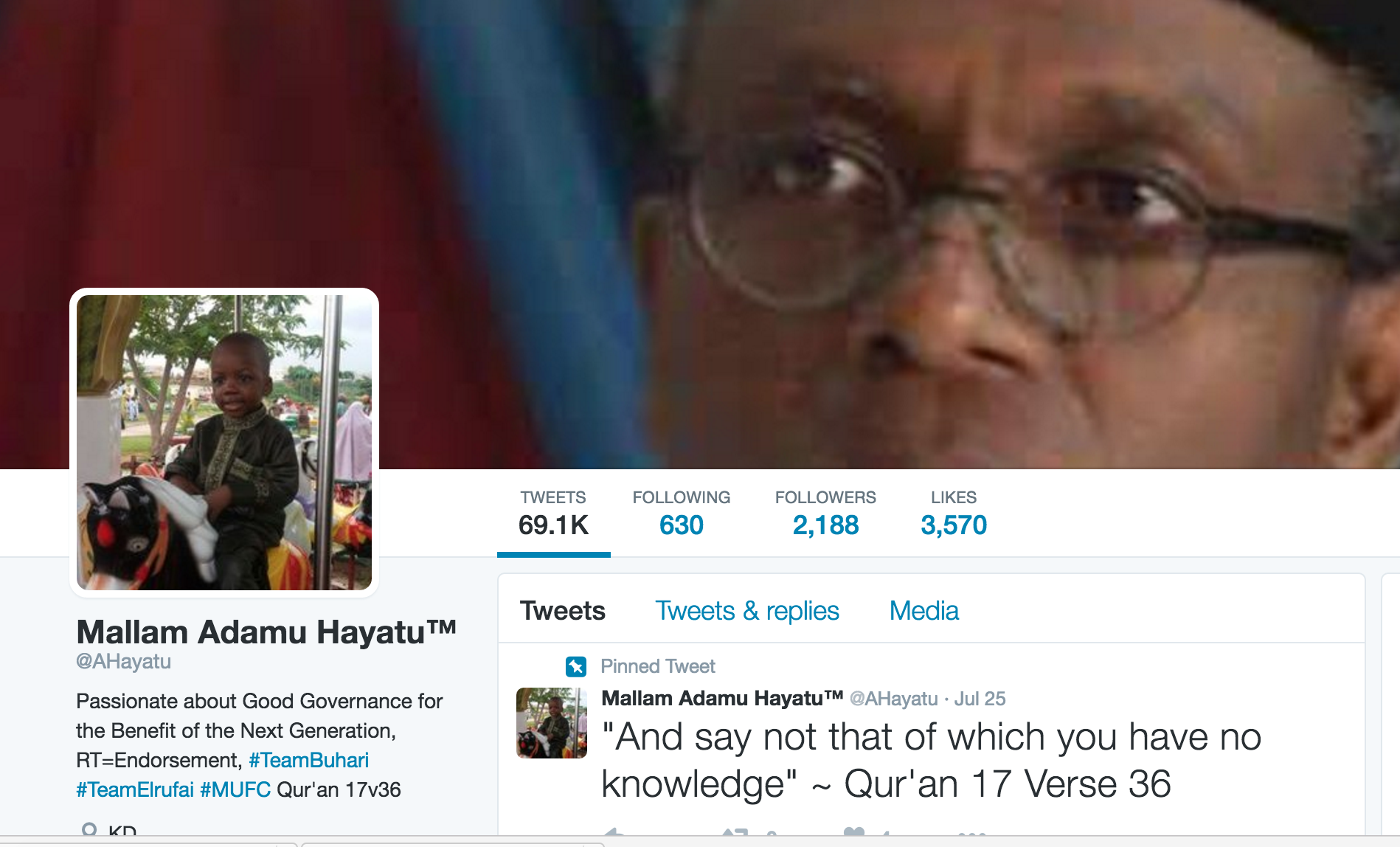 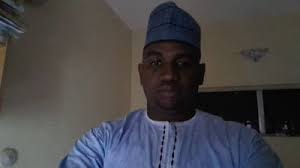 @AHayatu If you’ve a problem with those ladies, whether personal or partisan, have the balls to face them like a real man. Not blackmailing.