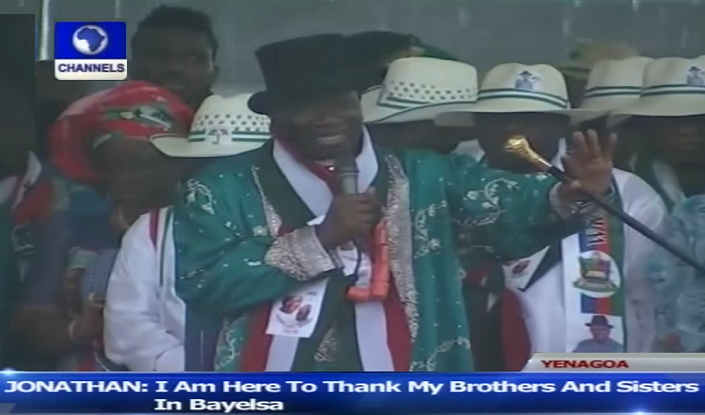 Nigeria’s embattled president appeared to be struggling to settle a harsh quarrel in his home state of Bayelsa today, but was unsuccessful as he was booed and “nooed” off the stage.

Jonathan said some funny stuff, he said after being first booed:

“I know some people are coming to spoil your mind.”

To which the people said “Nooo!”

“0.00 % of you have been infiltrated and hate us, but you must work with the governor of this state”

“Don’t allow anyone to deceive you, I am telling you as your father, uncle and brother

“You must work with the governor!”

And then came, PDP – Noo! PDP – Nooo!!! Heard above the suppression of the drums.

His wife was onstage earlier, rather entertaining. You must watch her

Interestingly, a water downpour  from heaven drenched the people and left them miserably all soaked!

It was not the best day for the president and another bad day in a series that have forced him to ensure the presidential election slated for the coming weekend which he was almost certain to lose woefully was postponed.

Watch the President booed in Bayelsa at 5 :00

Sahara says– In an eerie repetition of what happened to former Governor Timipre Sylva several years ago, a crowd of Bayelsa residents yesterday booed Governor Seriake Dickson and President Goodluck Jonathan at a presidential rally at the Samson Siasia Stadium in Yenagoa, venue of a rally for Mr. Jonathan’s re-election campaign. A rattled aide to Governor Dickson who spoke to SaharaReporters said he feared that, but for stringent measures by security agents, the crowd might have thrown sachets of water at the podium as Mr. Dickson spoke at the rally. Mr. Sylva was pelted with sachet water at the same venue several years ago.

Security operatives had barred sachet water vendors from the venue of the rally, and prevented people from taking sachet water as they entered the stadium. Security agents had taken the measures after some youth groups and militants warned that they did not want to see First Lady Patience Jonathan at the rally. She attended the event and spoke.

Mr. Jonathan was booed by a section of the crowd when he asked the voters of his home state to lend their support to Governor Dickson’s efforts to develop Bayelsa State. The crowd screamed “No!” each time Mr. Jonathan asked for their support. The interruptions compelled the president to abruptly end his speech.

President Jonathan had earlier stated that the electorate in Bayelsa had always voted for him throughout his political career. He had also acknowledged former Governor D.S.P.Alamieyeseigha, a convict whom Mr. Jonathan granted presidential pardon a few years ago, sparking public outrage.

“Let me publicly appreciate a man who I call my boss, Chief D.S.P. Alamieyeseigha,” said Mr. Jonathan. He added, “He was the one who brought me into politics and he is my boss.”

Speaking earlier, Mrs. Jonathan stated that her husband started his women friendly posture during his days as deputy governor and governor of the state by empowering thousands of women across Bayelsa. She said that Mr. Jonathan’s re-election would further elevate the status of women.