Modu Sheriff is behind the postponement of the February general election date; he is bigger than you, than Jega, than me, than all 168 million Nigerians and I have evidence.

For most of us, we only just realized that the president of Nigeria was determined to shift the general elections till he and his hired Chadian and South African mercenaries scored his eleventh hour victory over Boko Haram. INEC chair Jega only received the security update indicating the mission decided upon to liberate the northeast at all cost ahead of the general elections on the 5th of February. That was when most of us including the administrators of Borno first found this out, but not so for Modu Sheriff.

I will like to refer you to an article I published in several media on the 22nd of January this year, captioned, “From Borno: the State of Nigeria’s IDPs.” I quote:

“The opposition is accusing the state government of using human lives for political gains. The state government has been pushing IDP voting, while the opposition governor interestingly promised that he (the Federal Government) will soon liberate the local governments occupied by Boko Haram to allow the people go home and vote from there. How and when Sheriff intends to do so is not known.” [ENDS/22/01/2015]

That has been the political battle line in the northeast. The information here I obtained a while before I wrote that article. Borno locals, cut off from the rest of us can attest to this fact that Senator Ali Modu Sheriff has been confidently promising them that their areas will be liberated before the general elections and they will “vote from home.”

Loosing political clout in his home state – with him being shunned, booed and stoned at all recent visits – this , this has been Modu Sheriff’s only card left and the card he has been playing with both hands.

“You will be liberated before the elections and you will vote from your villages.”

There was no way this promise and calculation could be possible without a preplanned shift in the election dates because the MoU with Chad—hired for billions to liberate Nigeria’s northeast was just signed a day ago. And the new military hardware for the war only started being offloaded days ago. The 100 mercenaries Jonathan chartered from South Africa to help in the expedited mission to liberate the northeast ahead of the elections also just arrived.

I additionally have more evidence including a government produced recording made just this February and published February 5th which clearly stated that Borno would be liberated “ahead of the elections,” while Yobe may wait till after.

Idriss Deby of Chad was contracted by the Nigerian government and signed a fat deal with Jonathan to clear out the northeast on behalf of Nigeria, ahead of the new date to be set for the general elections so Modu Sheriff could keep his promise to the hapless electorate and as he hoped — win some grounds out of their desperation, and also so he can keep his promise to deliver the northeast to president Goodluck Jonathan. 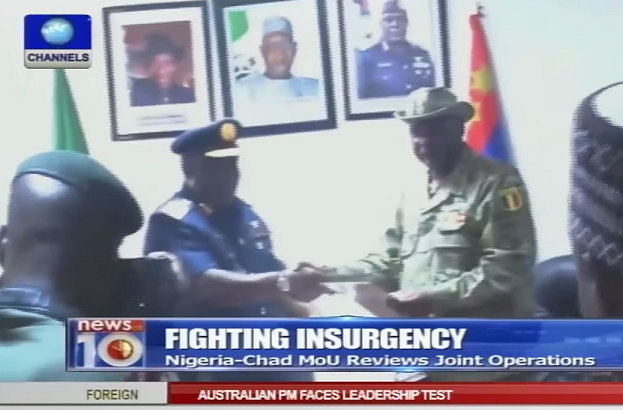 While speaking on the MoU with Chad, Nigeria’s Defense chiefs were asked by the ChannelsTV correspondent how Nigeria addressed Chad’s unusual withdrawal from the MNJTF last November, the action which permitted Boko Haram to massacre over 2500 defenseless Nigerians at Baga; and the defense chief Alex Badeh said without a care, “We have gone beyond that one now, we have signed MoU’s after… I don’t want to revisit that one, let’s leave it.” [ChannelsTV [email protected], 06/02/2015]

It is all about politics and Modu Sheriff just played you. We do thank God for whatever reason and regardless of the dirty plots and games; the northeast will be liberated at the end of the day (like it was in the middle of last year before they again allowed Boko Haram take it over to retain the terror situation political capital advantage). Thereafter Nigeria must make the necessary steps to CHANGE the system that puts politics, named terror sponsors and foreign incriminated governments and all their pockets and political ambitions and business interests ahead of its people.