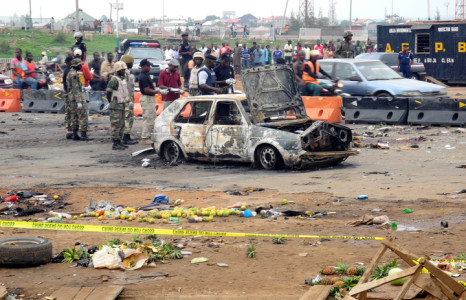 “By the time my driver ran to carry her, she was still breathing but the police and army officials wouldn’t allow him to carry her and then she gave up the ghost,” he said.

When Aliyu Danyaro’s 24-year-old daughter called him that she was on holiday and was visiting him in Abuja, he was elated.

He instructed his driver to go to the Nyanya Park to pick his daughter who would arrive in a public bus from her school in Bauchi.

But his joy was cut short following the May 1 Nyanya bomb blast that killed at least 19 people leaving 66 others injured.

Mr. Danyaro’s daughter was among the dead.

The father sobbed uncontrollably as he told PREMIUM TIMES that his daughter already dropped off at the garage and was about to receive his driver’s call when the explosion happened.

“She called me while she was on her way coming, so I instructed my driver to go and pick her. While he was coming to pick her up, he called but while she was about receiving the call, the bomb went off,” he said, weeping so much that he could not mention her name.

Mr. Danyaro also said that his daughter was still alive when his driver got to her. He said the driver was prevented from lifting her corpse by security officials who were there to maintain peace, thus leading to her death.

“By the time my driver ran to carry her, she was still breathing but the police and army officials wouldn’t allow him to carry her and then she gave up the ghost,” he said.

At the Asokoro hospital where Mr. Danyaro came to claim the corpse of his daughter, an injured person, Chijoke Njoku, explained how he survived the attack. Mr. Njoku said the Volkswagen vehicle that exploded was a few metres away from him. He said he had wanted to board the car, thinking it was a cab going to the Abuja city centre, when he noticed that there was nobody inside it.

“The car that exploded was just some metres away from me,” he said.

“I wanted to board the car but I noticed there was no one inside so I moved back to where I was standing only to hear an explosion,” Mr. Njoku said. “On regaining my consciousness, I noticed that it was the car that exploded.”

The survivor, who sustained a head injury, said he saw others on the floor with some of them bleeding profusely.
“When I regained my consciousness, I saw so many people lying down, even the ‘aboki’ guy selling recharge card was down on the ground and bleeding from the head,” he said.

He also commended the emergency response officials for their efforts in taking care of the bomb blast victims.
“They have tried so much as regards the treatment, when the crowd was getting too much, they had to take others to other hospital for treatment and care,” he said.

Another victim, Obiora Anibuike, said he had just driven past the Nyanya Bridge looking at the scene of April 14 bomb blast when he heard the explosion.

The April 14 explosion happened at the Motor Park, a few metres from the scene of the May 1 blast. At least 75 people died from the earlier incident.

Perhaps cut by shrapnel from the explosion, Mr. Anuibuike said he could not describe how he sustained the injuries from inside his own vehicle.

“I was just coming from Masaka. Immediately after the bridge, I was just driving, looking at what happened the other time not knowing that the same thing would happen again,” he said. “All of a sudden I heard a bang, I noticed I was injured, I jumped out of my car with blood all over me before the policemen came to save me.”

Mr. Anuibuike, who had just been discharged from the Asokoro hospital when PREMIUM TIMES met him, sustained a deep cut on his head and ear.

Though hospital officials declined comment, officials of the Abuja administration explained that the Asokoro hospital, where many of the victims were rushed to, attended to as many victims as it could.

Demola Onakonaiya, the Secretary of the Federal Capital Territory Health Secretariat, said the hospital was able to stabilise and transfer victims to other hospitals.

“The hospital facility is not overwhelmed, what happened yesterday (May 1) is transfer; you transfer to a point and then you stabilise and then move to another hospital.

“Yesterday there were about 28 patients here, then we moved five to Wuse and Maitama and six to National hospital and everything is under control,” Mr. Onakonaiya said.

The official also encouraged the media to assist security agencies in the fight against terrorism by sensitising the public on individual security measures.

“We need the media people in this fight against terrorism, sensitise the public because this is just wickedness for people to wake up in their house and land in the hospital,” he said.

Although no group has claimed responsibility for the May Day attack, the explosion is believed to have been carried out by the Boko Haram insurgents.

The group claimed responsibility for the April 15 explosion, with its leader Abubakar Shekau saying they could carry out more attacks in the Nigerian capital.