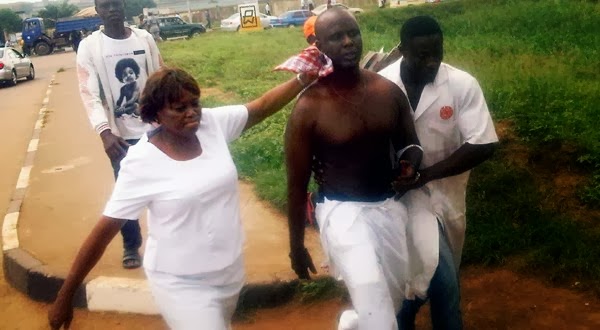 An eyewitness who works at the Murtala International Airport has revealed that two of the survivors of the Thursday plane crash in Lagos escaped death by jumping out of the plane minutes before it went up in flames.

Pleading for anonymity because of the sensitive nature of the incident, the middle age man, who works for Sahara Energy, said he was close by when the accident occurred.

He disclosed that he saw the plane tilt towards one side while in the air before it came down with a loud noise. (Sahara Energy where the eyewitness works is close to the site of the crash).

“The company I work for is very close to the site of the crash. I saw the plane tilt towards one side and I perceived the pilot was trying to avoid landing in a depot full of fuel close by. I think this was a great and timely decision because if the plane had landed on the depot the ensuing disaster would definitely be more than what we saw.

According to the eye witness, who spoke in an exclusive interview with Saturday Tribune, the plane broke into two after crash landing while a “short moment of grace” was offered before it eventually went up in flames.

“As I joined others to rush to the scene, I saw two people with varying degrees of injuries, including wounds on their heads, jump out of the plane. It was later I was able to identify one of them as the son-in-law of the late Agagu, while the other was not known to me.

“The plane did not burst into flames immediately it crashed, because it gave about 15-18 seconds moments of grace for help to come. But when help eventually came, it was a little bit too late as the plane had already been engulfed by fire,” he stated.

He also revealed that the operators of the depot who were the closest to the spot of the crash were the first to offer any form of help in terms of putting out the fire through their internal fire extinguishing system called JUHI (Joint User Hydrant Installation).

“It was 15 minutes after the depot operators made use of their JUHI that the fire fighters from the Federal Airport Authority of Nigeria (FAAN) got to the scene, while those from the Lagos State government got arrived at about 45 minutes after this.

“It was like a scene in one of the Hollywood movies, as I watched in awe when the plane veered to one side with one of its wings pointing downwards. It eventually crashed just a few meters from a depot which had tanks, I believe were full of aviation fuel. By the time we arrived at the scene, moments later, it was difficult to see what was going on as everywhere was covered with a thick smoke,” he stated.

The Nigerian Civil Aviation Authority (NCAA) has disclosed that Feyi Agagu, the son of the late former governor of Ondo State, Dr Olusegun Agagu, is responding to treatment at the hospital.

It also revealed that it had reached out to about 80 per cent of the victims’ families involved in Thursday’s crash.

Briefing journalists on the condition of the seven survivors, the Director of Aero-medical, NCAA, Dr Theresa Bassey, said the regulatory body and other aviation agencies had visited 80 per cent of the families’ victims and that the son of the late governor was doing very well, as he was talking and discussing with family members when they visited.

She disclosed that two of the survivors were in the Intensive Care Unit of the Lagos State University Teaching Hospital (LASUTH), and that one of the survivors that was at the Federal Medical Centre, Ebute-Meta, had been moved to the Special Burn Unit at the Gbagada General Hospital for intensive medical care.

Asked when the least injured survivor would be discharged from the hospital, Dr Bassey said, “We will not go into doctor-patient confidentiality. At this point, we should just say everything is going on well and the doctors are happy with the progress.”

She said that among the survivors were two cabin crew members and one technician. She also disclosed that the House of Representatives Committee on Aviation, led by the Chairman of the Committee, Hon Nkiru Onyejiocha, were also at the hospital to see the victims.

On the claim by the airline that it had an insurance policy with Sema Insurance and Re-Insurance, the Head of General Aviation, Capt Dele Sasogbon, said the NCAA could not answer the question, and that it was only the AIB in the cause of its investigation that could reveal if the claim was true or not.