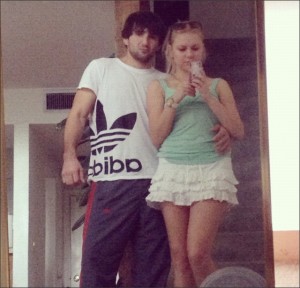 Tatiana Gruzdeva, the live-in girlfriend of Ibragim Todashev, has been arrested for a second time and is reportedly being deported for providing Boston Magazine with an interview that detailed the couple’s account of harassment by the FBI.

Infowars invited Gruzdeva, who will turn 20-years old in six days, for an interview on Sept. 30, but she declined and provided the following statement:

“Good morning! Im sorry, I really don’t want to have more problems , I already have a lot!! And not only me couple Ibrahim’s friends also .. I don’t want to make it worse. Sorry.”

Local 10 news reports that when Gruzdeva went to the immigration office to sign papers for an extension on her work visa, she was arrested by the Department of Immigration and Customs Enforcement.

She reportedly told Boston Magazine in a collect call from jail that she was being held in solitary confinement again, and was being deported for her interview with the magazine. According to reports, she had been waiting for weeks for the work authorization form that would allow her to work legally in the country.

The Council on American-Islamic Relations said when they reached out for comment from FBI spokesman Paul Bresson, he declined. The group also reached out to the spokeswoman for the US Immigration and Customs Enforcement, Carissa Cutrell, but her voicemail was off due to the government shutdown.

Gruzdeva previously spent three months in jail, and five days in solitary confinement on charges of an expired work visa, despite the fact that FBI officials were aware of her expired visa but ignored this violation during their previous interrogations of the couple.

Todashev was brutally murdered by the FBI execution style while she was incarcerated on May 22 in his Fla. home. The agency has since refused to release any information on his murder, citing national security.

Todashev was an alleged acquaintance of the Boston bombing suspect Tamerlan Tsarnaev. The FBI seemingly believed Todashev might have been aware of Tsarnaev’s relationship with the CIA, and his role in the Boston Marathon bombing, or more accurately, the government’s setup in which they framed the Tsarnaev brothers as patsies.

In April, Infowars confirmed Tamerlan Tsarnaev attended a workshop sponsored by the CIA-linked Jamestown Foundation. The FBI admitted they interviewed Tamerlan, but found him not to be a threat. Also, Homeland Security boss Janet Napolitano admitted their awareness of Tsarnaev’s trip and alleged he returned from Russia “with a willingness to kill people.”

The FBI has aggressively pursued several of both the Tsarnaev brother’s friends and Todashev’s friends through arrest and numerous interrogations. Reports prove the FBI asked some of Todashev’s friends to “spy on local mosques and threatened to arrest them” if they didn’t comply.

In late Sept., I released a report on Ashurmamad Miraliev, a friend and roommate of Todashev and Gruzdeva, who was arrested by Fla. police on Sept. 20, on charges of “threatening a witness in a 14-month-old battery case against Todashev.”

I was able to confirm with the Osceola County Jail in Kissimmee, Fla. that his bail is set at $50,000, however, even if he were to be bailed out, he is under an immigration hold, meaning upon his release he would be turned over to immigration and possibly deported.

Reports came in late last night exposing the treatment of Dzhokhar Tsarnaev, who is still being held in a federal medical prison in Mass. His communications with family and even his legal team have been severely limited.

His attorneys argue the harsh isolation he’s been kept in for over four months is considered a form of torture. The solitary confinement is a direct order from US Attorney General Eric H. Holder, who also maintains the authority to decide whether or not the 20-year will receive the death penalty.

Officials are making the outlandish claims that if Tsarnaev interacts with other inmates, he may be able to incite violence and “conspire to commit additional criminal activity.” They are treating the 20-year old as if he is a severe societal threat similar to the fictitious character Hannibal Lecter.

More is expected to unfold regarding the Boston Marathon bombing, stay tuned for more updates.