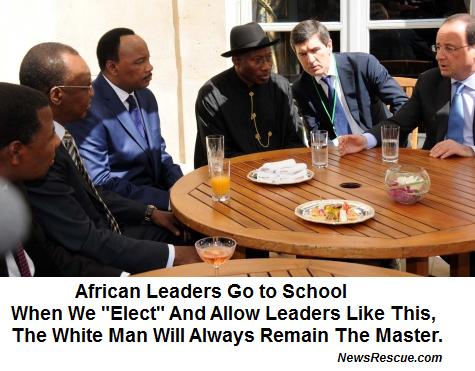 The President of Nigeria and other African ‘leaders’ were summoned to ‘school’ in France last week. They needed to be instructed by the sons of the colonialists on how to protect human life. To some, this summoning on this shameful proliferation of terror in Nigeria, is OK. But to those of us who see Nigeria as going backward to the stone ages and not forward, this is a day of sorrow, regret and overwhelming shame.  We took our bloody filthy linen to master. This is the result of the ‘election’ of clueless, shoeless leaders. This is the result of hopeless tribalism, irreligious religiousism, and sheer stupidity.

Late Yar’Adua addressed this same terror crises swiftly and entirely, while also simultaneously adequately controlling a dangerous crises in the Niger Delta creeks. Late Yar’Adua had a contingency plan to extinguish the embers of Boko Haram. He even initialed a program to monitor and license all preachers in Borno, to forestall any resurgence of radicalism; and this program was accepted by the religious leaders in the State. There were several high level constructive discussions on how to deal with the few who might have escaped and how to prevent the re-establishment of Boko Haram or any similar assembly. But one thing we lack in our hopeless colonial democracy is any form of sensible continuation… and that’s just one more thing out of a million.

Shagari with his military commander, Buhari quelled several crises including Habre’s Chad invasion and Maitatsine crises of our earlier history. Nigeria with ECOMOG solved Liberia’s crises. But today, we cannot control clearly defined, ridiculous crises in our north east, and verily and truly, resurging in our South as well. 168 million Nigerians and our African partners ‘cannot’ crush Boko Haram, so ‘some guy’ had to drag other neighboring Presidents to the colonial master’s school for training. And that is the colonial master who has hardly ever solved any problem without leading to five more immediate problems and twenty more in the distant future.

OK, so the guy went to school and suddenly started singing very different songs: that Boko Haram had killed ’12,000’ people he sang, and injured 8,000. We have never heard this from the some guy before. The number actually is 40,000-80,000 killed and over 200,000 injured, but still, this was interesting to hear from him. He went on to sing that Boko Haram was Africa’s al Qaeda, not AQIM, LRA, LIFG, Al Shabaab, no it was Boko Haram; and not many as a network, just Boko Haram. It appears he needed to sing real loud to force us to appreciate why he had to go to school. We were just waiting to hear him sing that Boko Haram had acquired nuclear technology and detonated two bombs. Perhaps he did say so; haven’t yet reviewed all the songs he sang.

Do not for one minute get this wrong. Boko Haram is indeed a terrible, terrible threat. We have been saying so since 2012, or rather, 2011, when he surprisingly ‘pinpointed’ those behind the Abuja bombing while exculpating those who admitted carrying it out. So it must be that these new songs were in the study guide he was given to read enroute school. Thank God. It is about time. #DiaRISGODo!

Let’s for the purpose of the new reader, describe this government at the least as being tolerant to terror. This fact cannot be denied or diminuted. To us it was a surprise and disappointment that some guy was not arrested in school. Let’s be candid here and review our predicament with the honesty the 234 girls in the bushes would require of us. This government has completely tolerated terror over the past four years, so I wonder, how do you discus with such people in school? Was the class session honest at all? Are we being fooled here? Is there reason to be hopeful? Many especially in Nigeria do not understand what supporting and financing terror is and how this is causing terror, death and abductions with unlimited pain.

Bamanga Tukur, then chairman of the ruling PDP political Party, said, ‘Boko Haram is fighting for justice; Boko Haram is another name for justice.’ Christian Association of Nigeria, CAN at the time complained bitterly about this, wondering why the media did not scream about it. They were correct. This statement promoted and supported Boko Haram terror and still does today as it is yet to be retracted and the culprit is employed in sensitive public office by no other than ‘some guy.’ How In a world that rotates around the Sun, can such a person who made a clear terrorist statement, be officially maintained in his post as Party chair and then appointed by the President as head of Nigeria’s railway corporation, and that ‘President’ is invited to France to discuss terror dismantling Nigeria? That is like inviting Idi Amin to USA to discuss terror within his country. Are we supposed to become children or stupid here to understand international politics or does Paris tolerate and support this terror promoting government as well?

CAN president said: “The statement by Bamanga Tukur is frightening and threatens the existence of Nigeria as a Nation. For such a statement to come from a man of his caliber, it is something all of us should be worried about. “I am surprised that the media are yet to take him up on the statement to explain to Nigerians and to the World, whose justice he is talking about. The PDP national chairman has become the spokesman for Boko Haram.” [The Nation; 24/05/2012]

We can continue to list several Nigerian current and past government officials and their private partners indicted in the direct support, sponsorship and promotion of terror in Nigeria, who are protected by the current administration. These persons are the simple reason why Boko Haram is alive, healthy and deadly today. They are the fuel of the fire that burns ordinary Nigerians. ENDS has in its possession video recordings of the confessions of arrested Boko Haram members who said that the ex-Governor of Borno State was a sponsor of the group. Of course we can and will furnish this as and where demanded. The Abba Moro White paper report on Nigeria’s President and NSA Dasuki’s desks since 2012 lists these persons among others behind the evolution of Boko Haram terror. This is serious. This is the reason why we have Boko Haram eliminating the farming villages in Nigeria’s north.

What Is ‘Sanctions Against Boko Haram?’

Now, the master/teacher said at the end of the session in France that sanctions will be imposed on the terror groups. We have been piqued by this submission of the school that held in France since we heard it. They said they were committed to prioritizing the hasty “implementation of international sanctions against Boko Haram, Ansaru and their main leaders, within the United Nations framework.”

On 7th of May this year, ENDS made a serious, clear and detailed call for UN sanctions and strong resolutions against Nigerian government officials and their private partners who created and permitted an atmosphere of terror with some implicated in directly sponsoring terror in the nation. [See ENDS] We believe this is clear and logical. International sanctions are effective and meaningful against nations whose duty it is to limit the activity of bandits and terror associations in their State. Nigeria deserves such sanctions against and for the reasons we earlier stated: the continued impunity for terror sponsors and supporters in Nigeria. If Nigeria’s government clamped down on all supporters and sponsors of terror in Nigeria, Boko Haram would be snuffed out and new terror groups evolving ahead of the ‘upcoming’ 2015 elections will die before their birth. Boko Haram terror in Nigeria is the direct result of the government tolerance of terror, at the very least as earlier stated, and frank support of terror, candidly put; with associated sabotage of the security outfit while sponsoring ex-militant terrorists(like Tompolo)with same funds for military development, further mortgaging any possibility of security of life and property.

What sanctions against Boko Haram are to be initiated? At last are the UN, US and France moving ahead to hastily proscribe the group and finally declare it a terror organization (FTO) so its global transactions and communications world-wide including through and with Nigerian officials and the officials themselves become criminal(s) to be arrested or killed locally and internationally? ‘Sanctions’ gives official State recognition to an entity. There are three reasons for which international sanctions are given: Sanctions are either to ‘force cooperation,’ to ‘ to contain a threat to peace’ or handed out by the Security Councils to condemn actions of nations. What is to be sanctioned? We hope the sanctions being initiated are the proper sanctions against the entire organization and the government of Nigeria and their private partners who the world knows are directly and indirectly behind Boko Haram terrorism; with the ‘missing,’ looted billions of Nigeria’s commonwealth being much of the money that sponsors Boko Haram.

We would like to know, did ‘some guy’ ask why international governments, now alleging commitment to abating the crises he has let out of hand, have been hesitant to list Boko Haram as a terror organization, with the United States merely listing three members as terrorists and refusing to list the organization in entirety as one? Was he allowed to ask questions in school or he only went to study and take notes? When shall we see Boko Haram listed globally as a terror organization?

Was the Algerian approach to its similar Boko Haram crises that plagued the North African nation between 1991 and 2000, in which it trained and armed civilian self-defense patriots who helped abate the problem, raised at the meeting?

Do we have hope in this international ‘commitment’ or are we simply taking some guy to make more mockery of us and our plight? Nigeria has a serious security problem on its hands and we have no government or security agency and force to tackle it. It is a shame that the people of this great country and its neighbors ‘could not’ solve this problem. But regardless of this, we have no time for fancy coating. People are dying every single day in the hundreds. The people of Nigeria are ready to and have stood up to tackle the administrative sponsored monster that kills us; we have no time for games.

With regret and yet glory to the Almighty, we pray for the 49 more innocent farmers killed in Damboa in this government tolerated Boko Haram onslaught against Nigeria’s northern farming villages. We pray and support the civilian armed resistance against terror and celebrate their victories and their killing of over 300 Boko Haram terrorists in the last 10 days and arresting of others from whom much vital information and equipment was retrieved. We support this real initiative that promises to end Boko Haram insurgency in the near future.