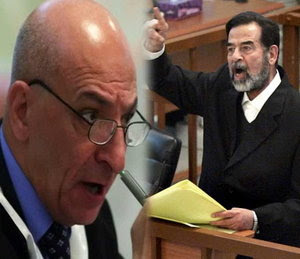 New Delhi: Islamic State of Iraq and Syria (ISIS) militants have reportedly captured and executed Rauf Rashid Abd al-Rahman, the judge who sentenced Saddam Hussein to death. Reports of the local media were not confirmed by the Iraqi government.

Rahman sentenced Hussein to death in 2006, was killed by rebels as revenge for ordering the death of the 69-year-old.

The International Business Times, reporting Judge Raouf Abdul Rahman’s capture, sourced it to a Facebook post by al-Douri. New York Times recently called al-Douri the force behind the dramatic ISIS offensive. He was deputy chairman of the Iraqi Command Council until the 2003 US-led invasion. In 2007, he was named leader of the banned Iraqi Ba’ath Party.

New.co.au reports: Jordanian MP Khalil Attieh wrote on Facebook page that Rahman, who had headed the Supreme Iraqi Criminal Tribunal during Hussain’s trial, had been arrested and killed.
“Iraqi revolutionaries arrested him and sentenced him to death in retaliation for the death of the martyr Saddam Hussein,” he said.