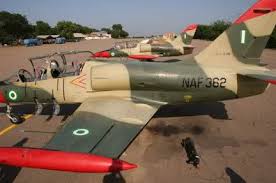 Operatives of the Nigerian Air Force in collaboration with the Army have destroyed Boko Haram hideouts in parts of Borno State and succeeded in killing insurgents in an ongoing operation.

A statement signed by the spokesman of the 79 Composite Group of the Nigeria Air Force, Maiduguri, Squadron Leader Chris Erondo said, “The air raid was carried out with other sister security operatives and is in response to incessant threats by Boko Haram terrorists in the northeast.”

He said the onslaught which started “in the past couple of weeks is ongoing.”

According to him, “The Composite Group, in conjunction with the 75 Strike Group, NAF Yola, deployed air platforms which carry out air surveillance, interdiction and raid operations on Boko Haram hideouts in Bulabulin, Yujiwa- Alagarno, Damboa axis of Borno State,” he said.

The spokesman did not give casualty figure, insisting that so far, many communities have been rescued.

” The results of these air operations have been remarkable as the insurgents who have resorted retreating to neighboring countries such as Cameron, Chad and Niger Republics have suffered heavy casualty,” Erondu said.