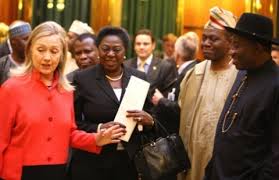 Mrs. Hillary Clinton, the former US Secretary of State in separate events in New York City said the Nigerian government under President Goodluck Jonathan, squandered its oil resources, and indirectly helps corruption to fester in the troubled country.

Clinton spoke with ABC-TV’s Robin Roberts on American national television, and also at a public function organized by the International Crisis Group. Later, the former Senator and First Lady made other critical remarks concerning Nigeria at a philanthropy parley, as she was widely quoted by several American media outlets, including CNN.

Clinton stated the following position in the New York events she attended, challenging the credibility and quality of the country’s leadership under President Jonathan’s watch.

“The seizure of these young women by this radical, extremist group, Boko Haram, is abominable, it’s criminal, it’s an act of terrorism, and it really merits the fullest response possible, first and foremost from the government of Nigeria,” Clinton told ABC-TV. “The government of Nigeria has been, in my view, somewhat derelict in its responsibility toward protecting boys and girls, men and women in northern Nigeria over the last years,” she said.

“The Nigerian government must accept help – particularly intelligence, surveillance and recognizance help – their troops have to be the ones that (are) necessary, but they could do a better job if they accept the offers that are being made. Nigeria has made bad choices, not hard choices,” Clinton said, parroting the name of her forthcoming memoir.

“They have squandered their oil wealth; they have allowed corruption to fester, and now they are losing control of parts of their (own) territory because they would not make hard choices,” she went on to say.

“The Nigerian government has failed to confront the threat, or to address the underlying challenges. Most of all, the government of Nigeria needs to get serious about protecting all of its citizens and ensuring that every child has the right and opportunity to go to school,” she said in her address to the function organized by the International Crisis Group.

“Every asset and expertise should be brought to bear. Everyone needs to see this for what it is, it is a gross human rights abuse, but it is also part of a continuing struggle within Nigeria and within North Africa,” she added forcefully.

Clinton, often mentioned as the leading Democratic Party candidate in the upcoming 2016 U.S. Presidential election cycle, has not yet announced whether she will run for the White House. Yet, comments from the respected former U.S. Secretary of State do carry political weight beyond American borders. – SaharaReporters