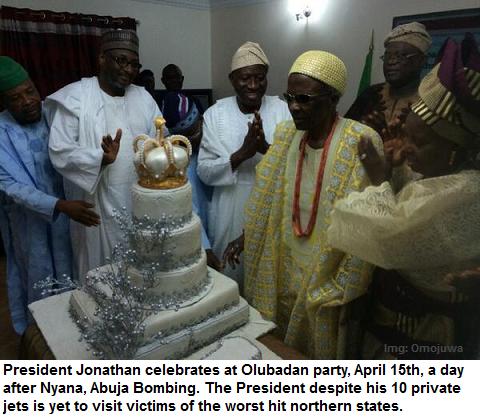 There is no question that the president of Nigeria, Goodluck Jonathan is a sick man. To be partying and dancing hours after a massacre in the nation’s capital and rallying with more dancing in illegal campaigning the same day and a day when 200 innocent girls were abducted into the bushes by lunatic, rapist murderers. Only a sick person can do that. Some of us have been perturbed since yesterday. We are anxious, worried, disorganized and weak in the knees. We look at our daughters, nieces and shudder. But the president of Nigeria is either sick or he hates the poor and most especially poor northerners. There’s no need overemphasizing his pathological love for parties, for power and for stupid utterances and actions. Desensitized is too kind a word. He has frank sickness or disdain for the affected peoples.

He was best described by Governor Sule Lamido, as being like an insane child left to run around with a box of matches at a petrol station.

But the president is not the only to blame at this time. In fact his disposition, clearly one with problems in his upper functioning or one with malicious intent and agenda against the poor and the north especially, though even the poor in his state suffer, with Bayelsa after four years of his rule, being the most polluted land on earth—scoring 40 oil spills/month, and the kidnap and high sea piracy capital of the world; the northern leadership too have major issues, they are dead.

Not sure which is better to have, a sick psycho ruler or a dead leader? A psycho leader can and will burn down your house, but a dead leader will not turn on the water when the fire comes, because he is DEAD! The northern leadership is dead. They have been dead for a long time. They were dead when Boko Haram first started. They have been dead through the carnage and they are even deader now as they believe their duty is to wait till 2015. Does the Bible or Quran tell them that when the innocent poor people in their wards are being massacred they should wait for European democracy timeline? They should show me where that is printed in the Holy books. Does the Bible or Quran tell them that when the people in their ward are being killed under their ward, they should wait for a president to do something, who has been certified unhinged?

What manifest tells them they must not with urgency, seek territorial semi-autonomy, regional control and utilize this to determine and map the survival of the people in their domain? What nation are they waiting for, what Abuja, what federal government are they waiting for to provide security to the villagers when they call hours before Boko Haram attacks? This has not happened in four years and yet they allow the people to die, waiting and complaining to Abuja? We the people do not take their rubbish any more. The security system led by Abuja does not respond. When the people in the villages call the army, in Zamfara, in Bama, the army does not come. Shall these governors wait or shall they determine their own course and take control of the security of their areas?

The killers in Zamfara are known, yes, Buhari (not the ex-president), Kundu and Munjagara are some of the listed, the police and villagers know their names and their camps. The leaders have been arrested and released by the state security. This means, Abuja today wants you dead. Any government that releases killers and celebrates dead killers wants you dead. It is a government that supports terror, plain and simple. Any government that refuses to apprehend terror sponsors is a government that sponsors terror. And the dead governors will not stop this, because they are dead. The minute a known terrorist or terror sponsor is allowed free by Abuja, this means Abuja wants you dead. Other than the governor of Adamawa, Rt. Vice Admiral Murtala Nyako, who is screaming as is human and alive human appropriate response, the rest of the leaders of the north are dead. And it is not just to scream, it is to take action and determine the security of their domain or resign in sincerity. Has even an impeachment motion been proposed, even if it will clearly fail? Or they are telling the world that this president does not deserve even an attempt? Has any one of them called for a vote of no confidence?

How can 100 cattle be stolen in your ward and you cannot find them for your people? How can thousands be killed, homes burned and you operate under a system that does not bring justice for the people. How can 200 girls be abducted, in one of the largest mass kidnaps in recent global history, and hidden in bushes in clear sight, by terrorists who for some suspicious reasons, burned the truck that failed to move—to cover finger prints perhaps—and they do nothing, show they can do nothing and do not retire… oh, they cannot retire, because they are dead. Dead people do not retire. Waiting for a 2015 election that may never come, while hundreds are dying and Abuja is dancing.

And the insensitive leaders of the south: let’s call them tranquilized for now. God is not a liar. All of you leaders shall see.