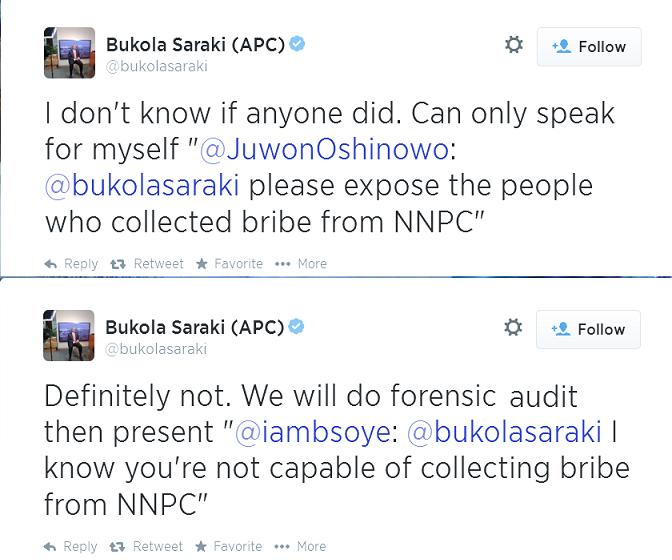 We broke an exclusive scandalous revelation of the NNPC engaging with temerity in the bribing the 11 members of the Committee on Finance investigating the missing billions of dollars exposed by Nigeria’s central bank in just 18 months reviewed.

Our article yesterday exposed that the NNPC had been bribing the committee members with massive million dollar packages to sign-off on  the report as concluded and absolving the NNPC and minister Diezani Madue, popularly referred to as untouchable  oil goddess, of error and mismanagement of funds without waiting for the results of the forensic report.

As at our intelligence yesterday, NewsRescue found that 6 of the 11 member panel had signed. Senator Bukola Saraki, a panel member was challenged on the Bribe scandal and denied being one of the members who took this massive bribe; his tweets are above.

The chief witness in the case, former CBN boss, Sanusi Lamido has since been illegally terminated and harassed by the government, making the ongoing ‘panel’ investigation lacking of credibility, honesty and merit.

We will continue to update the Nigerian people on this treacherous scandal that continues to undermine Africa’s largest nation’s financial security.