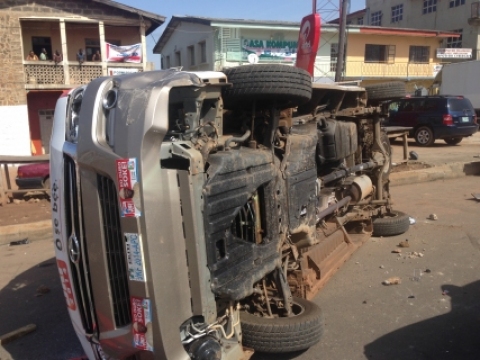 NewsRescue- Once again in the new dictatorship of Nigeria, a peaceful rally has been destroyed by police. The usual premise given in Abuja, Lagos and everywhere else is that ‘the police acted and beat up the peaceful protesters to protect them from “other” hooligans.’ What is happening in Nigeria?

Eyewitnesses told Saharareporters that the carnival-like street rally went on peacefully until the police unleashed a volley of teargas canisters and later used live bullets that killed a party member.

A few minutes after the attack, the state governor, Kayode Fayemi arrived the scene of the attack to ascertain what happened, the rampaging policemen did not spare him, he was tear-gassed while some embers of his security detail and the commissioner for integration in Ekiti State, Niyi Afuye, were arrested and taken away from the scene.

The Commissioner of Police and the Director General of the State Security Services later arrived the scene.

The attack on Governor Fayemi was carried by a police MOPOL Commander, Gabriel Michael Seleke from Bayelsa state

A vehicle belonging to Governor Fayemi’s campaign flipped over after the clash
By Saharareporters, New York

The People’s Democratic Party (PDP) has stated that the police action against members of the All Progressives Congress (APC) in Ado-Ekiti earlier today was done to maintain l”law and order.”

Mr. Metuh promised to provide evidence of the attack on PDP members to Saharareporters but had not done so as at the time of publishing this report.