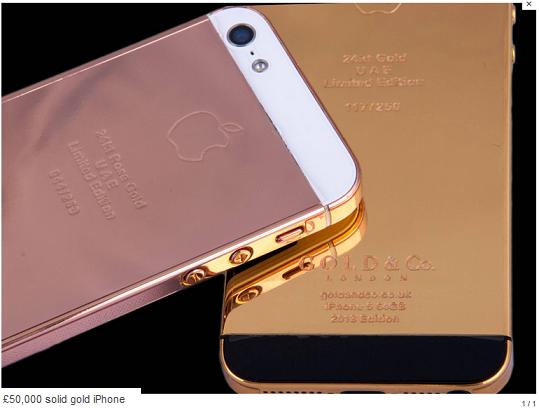 A Bristol-born businessman based in Dubai is bracing himself for a flood of orders for iPhones clad not in the gold-effect finish of the new iPhone 5S, but the real stuff.

Amjad Ali supplies royal families, governments, and minted customers across Russia, China and the Middle East with gold-plated devices that cost up to £50,000.

The 42-year-old entrepreneur, who grew up in Glasgow, has pre-ordered hundreds of new iPhones. His team at Gold and Co. will set to work the day after launch before delivering the devices to luxury retailers.

“We strip the units down and then plate them in copper, nickel and then pure gold,” he told the Independent. “We have limited units per region and each is numbered and placed in a handmade wooden box with a certificate of authenticity and wax seal.”

Ali typically delivers 50 devices a month, including Blackberries and iPads, but orders rose to more than 300 a month when the iPhone 5 was launched last year. The firm expects greater demand still for the sixth-generation device, announced today.

Gold and Co.’s customers have included the Saudi royal family, which, Ali says, ordered a gold iPhone studded with hundreds of diamonds, including a giant piece that served as the device’s “home” button. The bill: £50,000.

Basic models in gold or rose gold cost from £3,000. Ali says he is fulfilling an order from the Nigerian government for 53 gold iPhones to mark the country’s 53rd year of independence from Britain next month.

“We will engrave them with the coat of arms, a shield and two horses,” he said.

The Nigerian government is yet to react to the claim.

British luxury products company, Gold and CO, has revealed that it has an order from the Nigerian government to deliver 53 customised gold iphones for the celebration of the next independent celebration.

The founder of Gold and Co, Amjad Ali,, told the UK’s Independent newspaperthat the Nigerian government has made an order of “53 gold iPhones to mark the country’s 53rd year of independence from Britain next month.”

Mr. Ali told the Independent that the order from the Nigerian government “will [be] engraved them with [Nigeria’s] coat of arms, a shield and two horses,”

Mr. Ali’s Gold and Co clients include royal families, governments, and wealthy individuals from across the world.

A gold-plated device costs between £3000 and £50,000 (N750,000 to 12.5 million). The order from the government with its customised coat of arm is believed to be among the constant premium orders the company gets.

The London-based company recently received an order from the Saudi royal family for “a gold iPhone studded with hundreds of diamonds, including a giant piece that served as the device’s ‘home’ button.”

Gold and Co is yet to respond to PREMIUM TIMES enquiry about the Nigerian agency or official that made the order and the exact cost of the order from the government.

When contacted, Joseph Mutah, the spokesman for the Information Minister, Labaran Maku, asked for an SMS enquiry, which was sent.

Mr. Mutah promised to get back to PREMIUM TIMES on the federal government’s position.