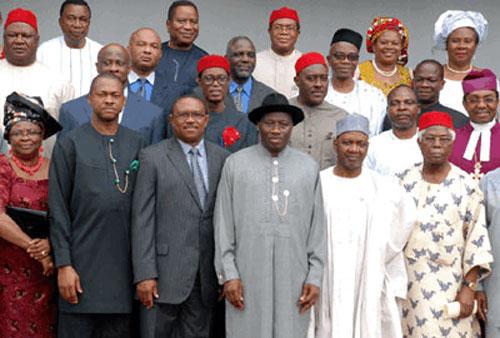 All it took to put to rest the self evident truth that the Presidency has purchased Ohaneze and other Igbo groups with 1.2 billion Naira for 2015 is a letter from Professor Ben Nwabueze to the President of Aka-Ikenga, Chief Goddy Uwazulike. When the vexed bribe scandal hit the air waves last year nobody paid any serious attention because we thought it was being exaggerated and because we know that no president has ever bribed Igbo with such an amount. They give our people small money because they are always satisfied with little things. They walk away with anything little or money because they are cheap.

When other Nigerians are busy upstairs negotiating for contracts worth billions our people are downstairs negotiating for contracts worth millions. The only way you will know that they just got a contract is noise they will be making on arrival at Enugu or Owerri Airports or even in their villages just to announce that they have made it. Picking the crumbs from the masters table has been the hallmark of Igbo politics since the end of the Civil War in 1970. Their so-called leaders sell the votes of their people for peanuts and just walk away with their loots while Igbo nation decays.

It is for this reason that Ohaneze and a section of the Igbo political class grows agitated, weeping more than the bereaved when any question is thrown at the Jonathan government. This is the reason why they offer themselves as body shield against those that criticize the Jonathan government. This is the reason Ohaneze has shamelessly placed a lid over the ambition of Igbo sons and daughters who desire for the presidency in 2015. Just for mere N1.2 billion these so called leaders shared among themselves, Igbos are being mortgaged into political slavery for many years to come. I know that history is recording the absurdities of the present for our generations to come to know where actually the rain started beating us. A part of this money has been used to purchase some cheap writers and journalists to invade the nation’s news space and the social media to misinform and confuse Ndigbo on critical issues that concern their woeful position in the nation’s scheme of things today. They have been trained to attack any person that goes against this destructive group think and that explained the flurry of paid criticisms that attended Prof. Nwabueze’s recent patriotic letter to President Jonathan on national issues.

Igbo has been settled with 1.2 billion naira for 2015 elections but ask our people how much Tompolo, Asari Dokubo, Chief Clark or Pastor Oritsajofor pocket every month. Asari Dokubo is planning to build a University. Chief Edwin Clark is planning to build a University. Pastor Oritsajofor has secured himself a private jet and he has just completed a 50,000 Seater Auditorium in Warri that costs millions of dollars. Igbo has become the cheapest article in Nigerian political markets.

Other serious sections of the country are busy planning how to rescue Nigeria from rudderless and clueless leadership but Igbo politics of anything goes will not allow them to think, reason and act. Long term planning and creative politics are not for them. Holding on and standing for something is not for them. Asawo (whore) method of money for hand and back for ground has been the roadmap for Ndigbo.

Anytime you see anybody seeking to lead Ohaneze or any other Igbo groups, know that such a person is not going there to add values to leadership but lean his pockets. Education has nothing to do with it because even Professors have failed Ndigbo. After all, Professor Joe Irukwu sold Ohaneze to Obasanjo’s Third Term Project. This is the reason why Igbo can never have the leaders in the class of Asiwaju Bola Ahmed Tinubu in the South West even though our people will claim to be at par with the South West in terms of anything.

I am deeply at pains that Igbo no longer understand the dynamics of Nigerian politics. Because they play cheap and kindergarten politics other Nigerians see them as cheap politicians without power of critical thinking, clout, energy and drive. The Great Book says woe betide a nation whose leaders are children.

Selfless, patriotic, strong and character driven leaders must be thrown up in Igbo land for us to get our bearing again in Nigeria. Lamenting about the current state of affairs in the South East will not help us. We must look back to know where the rains started beating us and therefore make amends. A friend tells me that he cannot help any body who does not know where he or she is going. The future they say belongs to the efficient.