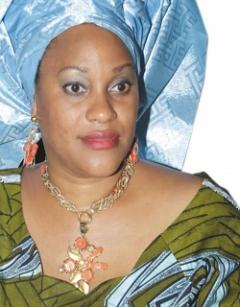 His problems with the Economic and Financial Crimes Commission began when it was headed by its pioneer chairman, Nuhu Ribadu, but it was in August 2008, under his successor, Farida Waziri, that he was arrested in Lagos.

Along with some other figures, Mr. George faced 163 charges that included conspiracy, abuse of office and illegal award of about N84 billion in contracts during his chairmanship of the NPA.  In October 2009, he was found guilty and sentenced to 30 months in jail.

In December 2013, in a controversial decision, the Supreme Court reversed that conviction, claiming that contract-splitting as an offence is alien to the laws of Nigeria.

Observers say the appointment of Mrs. Bode George to the key job of NDLEA boss is Mr. Jonathan’s way of apologizing to her husband as Mr. Jonathan tries to garner support for his run for re-election as president in 2015.  Mr. Jonathan has a local and international reputation for boosting corruption in Nigeria, partly by refusing to fight it, and partly by insisting that corruption in the country is exaggerated.  He is also on record as declaring that stealing by government officials is not corruption.