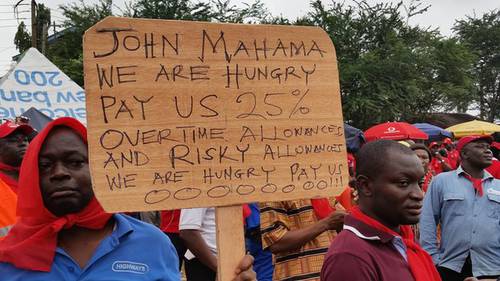 As many of you are aware, the 69th session of the UN General Assembly is just concluding here in New York City. As usual, we have witnessed a week of more than 120 world leaders taking their turns at the podium in heralding socioeconomic achievements, warning about security threats to their regions and, of course, executing the occasional political jabs at rival nations.

As a native of Ghana what really caught my attention during this year’s general assembly session occurred not in one of the many high-level meetings or debate sessions, but rather a much smaller event on the sidelines where Ghana’s President John Dramani Mahama addressed a group of American-based Ghanaians.

As reported by Starrfmonline.com, President Mahama greeted the gathering and explained that despite economic challenges facing the country Ghana was well on track to making socio-economic progress before going on to express his frustrations at the impatient nature of Ghanaians-an apparent reference to the largely unusual, and massive, nationwide July protests which saw thousands of Ghanaians voicing their anger at the rising cost of living and the extraordinary decline of the Ghanaian Cedi.

“Unfortunately in Ghana, we don’t count our blessings; you can have a glass and pour some water in it half way, you can describe that glass as half empty or half full. If you describe it as half full you are motivated to put some more water to fill it. If you count it as half empty then you are de-motivating yourself,” President Mahama said.

To be fair, President Mahama has previously, and on several occasions, asked Ghanaians to give his administration more time to pull the country out of the economic crisis we are currently facing.

However, The President’s statements in New York City have now dangerously crossed boundaries, suggesting that he is becoming out of touch with the realities faced by the average Ghanaian at home.

But perhaps more importantly, why should we be patient when all of this is happening at a time when Ghana has been drilling hundreds of thousands of sweet crude oil for the past few years?

Let’s not forget that Ghana also continues to enjoy ‘top dollar’ revenues from its position as the second largest producer of cocoa in the world and significant revenues from the production of gold.

So what is happening, President Mahama? Why should we be patient?

Despite several years of earning distinction on the global stage as one of the fastest growing economies, it seems to many, if not most, that Ghanaians are having to tighten their belts on shrinking waistlines whilst The President continues to reassure us that government development programs, otherwise known as government spending, will continue thanks to multi-billion dollar loans from the Eurobond market, IMF, and other willing “investor friends”.

So, at a time when more developed economies like Argentina, Greece, Cyprus, Spain, and even the UK are undergoing significant programs of government spending cuts, President Mahama would have us believe that we should continue the old policy of taking out more big loans just because the money market will give them to us.

As a Ghanaian here in the US, I cannot but compare President Mahama’s calls for patience with President Obama’s calls for American’s to do their part in pressuring Congress, and himself, towards progress.

“If American people put pressure on Washington D.C., we can grow our economy, we can lift people’s incomes, we can make sure people who are fighting hard can make it to the middle class. But it’s going to take you,” Obama told citizens in Georgetown, Washington DC in July.

In fact, President Obama has made several such calls to Americans, especially, earlier on in his Presidency. So why should Ghanaians with a much lower standard of living heed President Mahama’s calls for patience?

Compare this with other statements President Mahama made here in New York City at the same gathering of Ghanaians.

“Unfortunately in Ghana, if you just sat somewhere and listen[ed] to us you would think we live in the worst hell-hole in this world. I have visited other countries on the same pedestal as us and look [how] God has blessed us to have that country that we have,” said President Mahama.

Here, President Mahama is suggesting that Ghanaians should count themselves lucky because the future is brighter for the politically-stable Ghana as compared to other African countries experiencing current and recent internal conflicts like Nigeria, Central African Republic, Mali, Ivory Coast, and others.

Comparing our promising nation to less-fortunate African nations will likely lead to continued mediocre governance. In fact, if we don’t rise to challenge the status quo now and demand the much-needed changes in government stewardship, then when will we finally develop to our potential?

At the very least, we Ghanaians had better make something happen while the oil is still flowing to supplement the nation’s efforts, which have so far not yielded the promise of proper development.

There is no time to sit back. No, President Mahama, we cannot be patient with the current situation in Ghana.