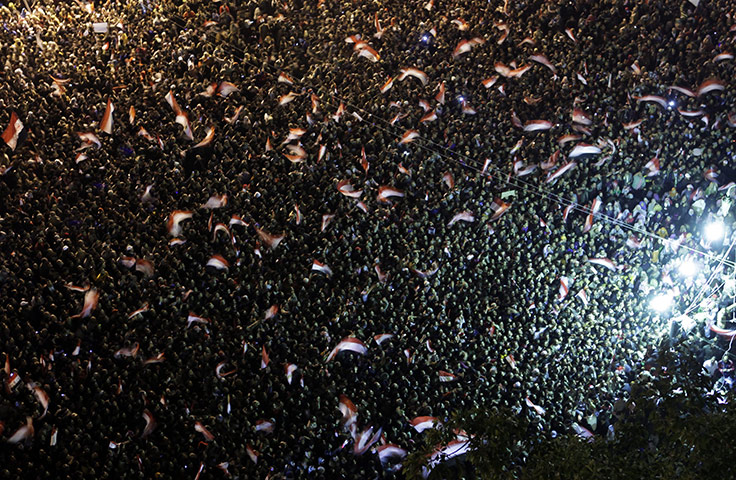 We still deceive ourselves that the set of leaders we have today can/will take us to the promisedland, they won’t, they will never. They brought us here; they won’t take us back to the good old days. You mean these rogues will wake up one day and say “no more stealing, it’s time to start working the talk” Jamais never. Don’t deceive yourself that change shall come with this our “mak we manage am” and “hin dey try now” mentality. We have to fix everything, no stone should be left upturned. We have to make this sacrifice, the great nations of today, nations we admire did make sacrifices, and we must be ready to take back our country, in order to be able to proudly say anywhere anytime “I am a Nigerian”. That great Nigeria can only be attained when there is merit, justice, equity and fairness.

You think they want to become governors and senators because they love you, NO. Why is there bloodshed during rallies/campaigns, why do they engage thugs? Why do they rig, why do they borrow money from banks to fund their campaigns? This same people claim they have your interests at heart. The military guys that brutalized us are still in Govt, this time around not in uniform. They still use officers of the law to oppress us. We say we are in a democracy, we can’t protest, we can’t express ourselves freely, we can’t fight for our rights, the sit-down look mentality is still there. Take it or leave it a revolution is what we need. It may look like a mirage to you, but it’s the bitter truth. If they truly have our interests at heart let them leave the political scene and surrender themselves for prosecution.

If you are in the opposition and you think they are the solution, you must be deceiving yourself. Most if not all of these guys in the opposition are rogues and are still looting. Even if you are deceiving people, stop deceiving yourself. I used to sympathize with the opposition but one day I told myself “why queue behind those that brought us here”. It makes no sense clamoring for a better Nigeria, while you hero-worship the rogues of yesterday, who are still enjoying their loot. Why support a thief against another thief, it makes no sense. Some of these so-called elites are only complaining about the Govt of today because of the “lack of bank alert” syndrome, some millions will make them shift allegiance,”Na highest bidder palaver now”, and you(the masses) can’t offer them anything. Nigeria has 99 problems, corruption is the number one problem. They loot our funds, compromise some people, give you peanuts, you start celebrating them, while their children pop champagne in New York, we wallow in poverty. They don’t want people to talk because they are doing no good. If you are queuing behind these rogues you don’t wish Nigeria well, shut up.

Some will say getting rid of these rogues is impossible, nothing is impossible, as far as the will is there it’s possible. Should we have a revolution we shall stand the chance of change, without a revolution things will never change. WE HAVE TO BE READY TO FIGHT. During the Arab spring there was no visible leader, everyone was leading by so doing the oppressors couldn’t compromise anyone, yes some were killed but had it been they had a leader he would have be killed or compromised but when everyone leads quenching the fire that will consume the oppressors will be hard/close to impossible. God bless Nigeria.