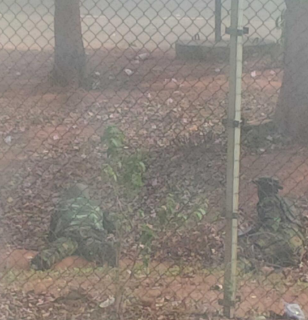 Operatives of Nigeria’s secret police, the State Security Service (SSS), today killed 18 detainees being held at the facility of the Department of State Security as some of the detainees reportedly overpowered their guards, shot several operatives and broke down heavy doors at the detention facility to stage a daring escape.

An SSS source told SaharaReporters that the militants succeeded in freeing several inmates and almost taking over the complex before reinforcement came from the Nigerian military. He said the detainees had held the detention facility under a siege for several hours, with security agents negotiating with them to end the tense stand-off. He added that the operatives, aided by soldiers, went on the offensive after the detainees who had obtained weapons had run out of ammunition. He said most of the dead detainees were shot dead as they fled the complex. According to the source, four fleeing suspects were shot dead at a park near the facility.

The source said he could not state if any suspects succeeded in escaping. He would also not comment on the number of casualties on the side of the security operatives.

After the shooting, SSS spokesperson, Marilyn Ogar, issued a statement that downplayed the attack, saying it was an attempted jailbreak by detained terrorists.

The statement issued read: “At 0715 hours, the Service suspect handler went to the detention facility within the Headquarters to feed the suspects.
“One of the suspects attempted to disarm him by hitting him at the back of his head with his handcuff.

“[The suspect’s] attempt to escape drew the attention of other guards at the facility who fired some shots to warn and deter others.

“The gun shots attracted the attention of the military with whom we have an understanding of mutual assistance in the event of any threat.

“The Army immediately deployed a team to reinforce our perimeter guards to forestall any external collaborators.

“The situation has since been brought under control. Further details will be communicated.”