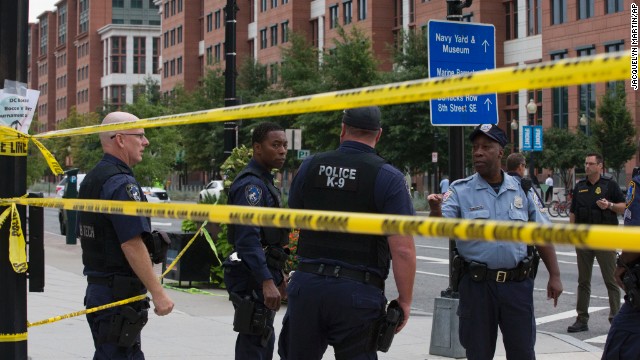 Multiple deaths in Navy Yard shooting rampage; suspects may be on loose

(CNN) — Multiple people were killed Monday after a shooter opened fire in a rampage at a Navy yard in the nation’s capital, putting government buildings on lockdown and sending police SWAT teams rushing to the scene.

One suspect is dead, but two others may be on the loose, Washington Police Chief Cathy Lanier said.

“The big concern for us right now is that we potentially have two other shooters that we have not located at this point,” Lanier told reporters hours after the shooting.

Authorities are looking for a white man and a black man in military-style clothing who could be connected to the shooting at the Washington Navy Yard, she said.

“We have no information to believe that either of those folks are military personnel, but we do have information that those individuals are wearing military-style uniforms,” she said.

Authorities said multiple people were killed and wounded in the shooting.

Who opened fire at the headquarters for Naval Sea Systems Command — and why — remains unclear.

“We still don’t know all the facts. But we do know that several people have been shot and some have been killed,” President Barack Obama said Monday afternoon. “So we are confronting yet another mass shooting. And today it happened on a military installation in our nation’s capital.”

My colleague Paul Lewis has spoken to an eyewitness at the navy yard in DC:

Patricia Ward, 53, a logistics specialist at the Navy, said she was in the canteen when the shooting took place on the fourth floor.

“I heard the first three shots: ‘Pow pow pow’. A few seconds later: ‘Pop pop pop’ – four more shots. And then everyone in the cafeteria just started running. We panicked as we didn’t know which door to use. One lady said stay in the cafeteria but I just said no. We didn’t scream, we were just in shocking, running, running.”

Ward ran out of the building an right blocks down M Street. “People were just flying out of the office. There was probably twenty or thirty people just running.”

• Several people have been killed in a shooting at the US navy yard in Washington DC on Monday morning, police and defense officials said.

• “We believe there has been loss of life and several injuries,” Pentagon press secretary George Little told reporters. Ed Buclatin, director of public affairs at the Navy Installations Command in DC said that four people have been killed and eight injured.

• Witnesses told CNN a gunman opened fire on them in the Naval Sea Systems Command Headquarters building within the US navy yard. “As he came round the corner he aimed his gun at us and he fired at least two or three shots,” one man said.

• President Obama and defense secretary Chuck Hagel have been briefed on the situation. “The President directed his team to stay in touch with our federal partners, including the Navy and FBI, as well as the local officials,” the White House said in a statement.

• Schools have been closed in the immediate area. Flights at Reagan National Airport were temporarily suspended following the shooting but have since resumed service.

‘We believe there has been loss of life’ – Pentagon

Spencer Ackerman, Guardian US national security editor, sends this update from the Pentagon:

“We believe there has been loss of life and several injuries,” said Pentagon press secretary George Little to reporters. Little had no information about any arrests made at the Washington Navy Yard.

Little said Secretary Chuck Hagel was receiving “regular updates” about the “ongoing” shooter situation at Building 197 in the Washington Navy Yard in southeast Washington. One was ongoing at 10.30am.