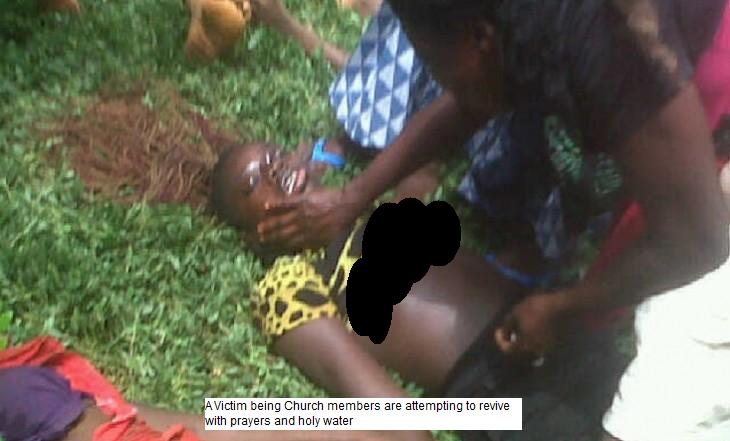 Information reaching 247ureports.com from sources on the ground in Anambra State indicate that over 30 persons died in the early morning hours of today [November 2, 2013] at a campaign event of the All Progressive Grand Alliance [APGA] at a prayer house in Uke in Idenmili – Anambra central senatorial district.

One of the many Killed

Relatives cry over their dead loved ones

Relatives cry over their dead loved ones

Governor Peter Obi and his candidate, Willie Obiano had arrived to the prayer house [Adoration Ministry] at the early morning hours of about 12:15am to address the audience that had come for night vigil.

The arrival caught the audience unaware and surprising. And as Peter Obi mounted the stage to address the audience – the audience broke out in a quiet murmur – unsure of what to make of it, the Governor continued to deliver his campaign speech with Willie Obiano standing beside him. Governor Peter Obi promised to make available N5million to the prayer house to help tackle a gully erosion site near the Adoration grounds.

As he spoke, the quiet murmuring grew louder – followed by chants of ‘Onwa, Onwa’. And in reaction to the chants of Onwa, Willie Obiano/Peter Obi’s men including security operatives began rushing towards the area where the chants of Onwa was coming from. The chanters were moving away from the approaching armed men. In the process, it turned into a stampede.

At the end of the stampede, over 28 corpses were seen littered on the grounds. An estimate of over 200 were injured. A large percent of the dead and injured are believed to be Ngige supporters, this is according to one of the survivors of the stampede – who also added that “they rejected Obiano and willie and were chanting Ngige Ngige it took hours to calm the crowd by Father Ebube Muonso so that Peter Obi could speak. Peter Obi made donation of N2million to the Reverend Father. The Father rejected it and ask him to give that to the poor whom he have starved for years. And later there was a stampede. Obiano and Peter Obi has sucked the blood of innocent worshippers. Peter Obi is the Chimaroke of Anambra.”

28 corpses have been deposited at Crown Hospital Nkpor. The wounded taken to Borromeo Hospital.

Rev Father Ejike Mbaka alias ‘Ebube Muonso’ (*Actually appears to be Fr Emmanuel Obinma) the founder of Adoration Ministries, organised a night vigil yesterday in Anambra State. A political party, which i won’t disclose it name for some reasons, came that same night, in the name of coming to get his blessings. If you are familiar with Adoration Ministry, u’ll know how multitudes, troop in for their crusades and vigils. Yesterday was not left out, so great a number of people came for the vigil. When it was now over, a political party hijacked the whole thing, using the advantage of the number of people that gathered, to campaign. During this fracas, people were now rushing through the exit. There was a stampede and many fell on it. Later over 20 person comprising of adults and children that were victims of this rush were picked from several places in the crusade ground. They were gathered and prayed for, splinkling holy water at them. Heard some revived. Shortly after this, over 20 that were still motionless after the whole prayer were taken to the hospital, this morning it was learnt that none of them woke up. They were all declared dead. This might have been averted, if there was no campaign at all yester-night.

The Founder and Spiritual Director of the Holy Ghost Adoration Centre, Rev. Fr. Emmanuel Obinma, a Catholic priest popularly called Ebube Mmuonso (the glory of the Holy Ghost), also went round to see and pray for the survivors.