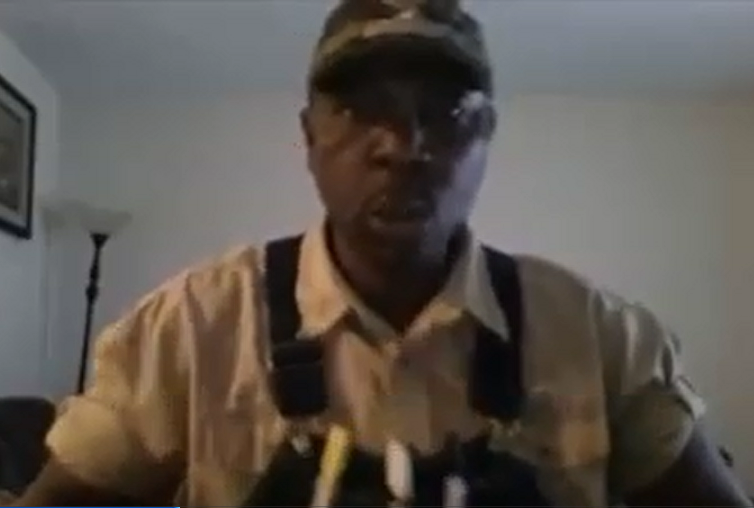 “You put your filthy privates into 12 year old children and say Allahu Akbar; you have no religion, this is not the way of fighting for Allah, you are ordinary thieves, you break criminals out of prison and you rob and you steal and claim to be Muslims or followers of prophet Mohammed (P)? No, you are not Muslims, you are unbelievers, your deeds are haram!

You have nothing to do with Islam!

You are mere thieves and criminals!

You claim you bring death and want it…

I promise you, you will get death, I will bring you death… it is only a matter of when and where. I will take sleep away from you!

I will bring you fire from the sky and on the ground!

I promise, I know where you are you cannot hide, this world is a mirror it shows all, I will find you, and I will bring you death.”

He spoke in no gentle words, many too harsh to be directly interpreted.

The commander additionally accused Kanuri people (the greater indigens and victims in Borno) of being cowardly and negligent for having not been able to fight and dismember Boko Haram.

*In the defense of the Kanuris, they (the Civilian-JTF) have fought bravely with dane guns and ordinary machetes however the very wicked Jonathan government refused their requests for the right to bear arms to really take the battle to Boko Haram.

The video was an unusual appearance as the Chadian army has just gotten involved in the Boko Haram war. Nigeria’s army generals and commanders have been muted, silent and have lacked motivation, hardly ever speaking to the public or to Boko Haram or ever speaking except when defending themselves or charging soldiers for mutiny.

After Nigeria’s government was unable to contain Boko Haram Chadian forces were chartered to assist and are now part of an African Union commitment of 7,500 troops to help curb the Boko Haram menace that has taken thousands of lives and destroyed millions in property mainly in Nigeria’s northeast.