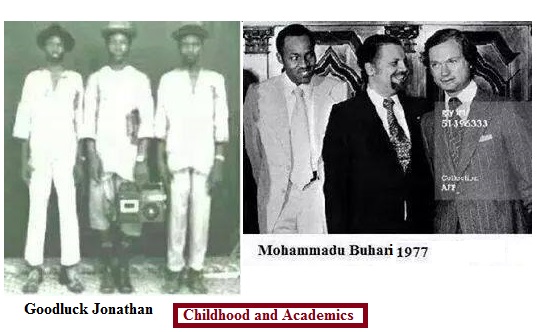 We are shaped by our thoughts. We become what we think. – Budha

I have recently become fixated in studying the early lives of our presidential contestants and public officials. We are shaped by our academic education and our professions. This is my current focus. Perhaps by visiting their past we can better predict our future.

The early life of the “people’s General,” Muhammadu Buhari and how a military life of discipline stopped people like himself and his late partner, general Tunde Idiagbon from ever being caught smiling. General Buhari I believe said you only smile on annual occasions. I grew up with a personal relationship with General Tunde Idiagbon. I sat with him for tons of hours. He had a close friend that was the funniest man on the planet—a jester who cracked jokes about jokes, literally. Late Tunde Idiagbon never smiled, talk less laughed. These are a very disciplined crop of people. The army has changed these days where you see public pictures of its top chiefs popping bottles and raising glasses; obese and morose looking. But let’s not deviate.

Nigeria’s president, Goodluck Ebele Jonathan had an interesting past—not talking about the fact that he did not just have shoes but had a thing for fancy shoes with really high heels—he studied zoology.

I looked for his thesis, but could not yet find it. I am eager to read it if/when it hopefully shows up. His field of training is in Zoology and water biology.

In zoology, I was able to find a paper he wrote as a lecturer with the college of education. It is a very short academic paper titled, “Identification of West African Estuarine Shrimp and Crab Larva.”

He is a specialist in shrimp, shrimp-life. As a published researcher myself, I know how engrossing and involving it is to study and research on items for possible publication in peer reviewed journals.

President Jonathan’s teacher, Professor Charles Bruce Powell (Late), spent so much time studying the waters of the Niger Delta, that he ended up converting from a primary ecologist to an environmental activist engaged fully (even getting detained), in the protection of the Niger Delta from the effects of logging and oil pollution. We indeed are what we study/engage in. It’s ironical his student is in charge of the nation when pollution is now even 10x higher.

I wanted to spend a day in the mind of Goodluck Jonathan, so I spent much of yesterday reading up on and studying the life of shrimp, his primary scientific specialization.

Shrimp are crustaceans. All crustaceans love to groom themselves; shrimp are most notable for their addiction to grooming. They can literally spend hours of the day grooming their exoskeletons, cleaning their appendages, brushing, preening, nipping body parts to make them all nice and trim.

They are very superficial creatures if you can call them such. For shrimp it is all about the clothes, the shoes; the appearance.

It is interesting studying shrimp. You spend days and years if you are a marine biologist or zoologist academician watching these fascinating creatures groom and groom themselves.

The other thing notable about these decapods (ten-leg) crustaceans is their cannibalism.

As you watch them you see them pick on dead bodies of fellow shrimp and gobble them up.

They find skin, animal parts and other dead stuff and eat it. They are scavengers.

Some shrimp actually eat other shrimp alive. I watched video where ghost shrimp were eating each other alive.

One day of studying the life of shrimp was a tasking and slightly harrowing experience. I’ll stick to just eating them. I congratulate our president on his academic prowess. I will be glad to soon read his thesis and any other collegiate academic publications to know more about this great person in Nigeria’s history.