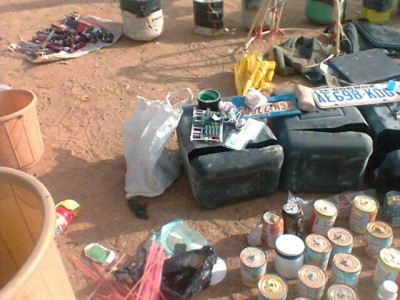 A combined Joint Task Force (JTF) and Directorate of State Security Services in Kano on Monday uncovered a bomb factory where sophisticated bombs and other dangerous equipment were being made with a view to using them to wreak havoc during the Eid –El Kabir and Xmas celebrations.

One man was killed in the property, in Gunduwawa village, in the Gezawa Local Government Area of the city.  He was said to be the son of the owner of the building.

Speaking with journalists in the city today, the Third Brigade commander, Brigadier General, Ilyasu Abba, confirmed that the man was killed during the operation because he was found inside the building between 2-3 am when the raid took place.

The commander said that when the combined team stormed the area it killed one of the terrorists.  He was discovered to be the son of the owner of the house, and had allegedly rented out the building without the knowledge of his father.

He said the festive period could have been a disaster if the huge amount of weapons was not discovered.

Amongst the dangerous weapons already made in the Boko Haram terrorist hideout were 193 rounds of 5.3mm ammunition, one AK 47 magazine, 107 rounds of 7.6mm special ammunition and weapons, working tools and materials used for making Improvised Explosive Devices (IEDs).

He further stated that the raid, which followed intelligence reports, made no arrests as the terrorists fled the village on approach of the JTF troops and DSS, adding that the need to avoid killing innocent people made the team not to attack them with maximum force.

Corroborating the remarks of Brig Gen Abba, the state DSS Bassy Etang said the son of the owner of the house who was killed was at the scene of the incident at a very odd hour, and that he must be one of the Boko Haram members since he was among those that gave out the building for rent without the knowledge of his father.

While commending the general public for their unflinching support and useful information being given to the security operatives, the state DSS director assured the public that information given would be treated with confidentiality.

He noted that without the necessary information from member of the public the authorities would have not succeeded in tracking the terrorists.

The director who disclosed that the very house where the Boko Haram members were uncovered has been demolished in line with security regulations, recalled that landlords have been warned several times to be wary of who they who they rent their buildings to.