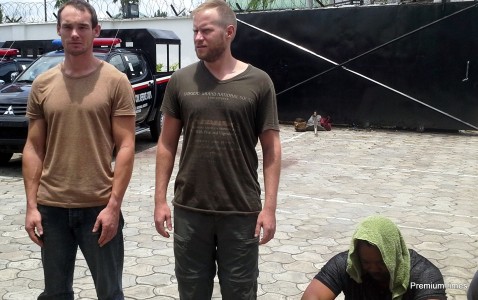 The Joint Task Force, JTF, in the Niger Delta, on Friday announced that its officials declined a N20 million gratification offered by a syndicate to facilitate oil theft. The members of the syndicate, including two Britons, were also arrested.

The Commander of the JTF, Emmanuel Atewe, who paraded the suspects before journalists in Yenagoa, said that the suspects were arrested shortly after offering $66,500 (N10.6 million) being part payment of the N20 million bribe pledge.

The cash exhibit was also displayed before journalists at the JTF Headquarters in Yenagoa.

Mr. Atewe explained that a representative of the syndicate approached the JTF with an approval letter from Naval Headquarters for a vessel, NNS Delta, to evacuate petroleum products.

Based on the letter, the JTF said it granted the approval and directed its troops to monitor the activities of the firm in the water ways.

The commander said that the oil theft syndicate unfolded a plan to hack into Shell Petroleum Development Company’s (SPDC) pipeline in Chamoni creek near Warri to siphon crude.

“The oil theft syndicate offered the Operation Officer of JTF’s 3 Battalion an initial payment of 5,000 for ‘recharge card’ and $1,500 to fuel the gunboat that will escort the stolen crude.

“The two British Nationals subsequently requested a meeting with the Brigade Commander of 4 Brigade where the suspects expressed their desire to connect a hose to SPDC pipeline along the Chanomi creek in Delta state to illegally siphon crude oil into barges.

“The foreign nationals promised to bribe the Brigade Commander, Brigadier General Fidelis Azinta with N20 million and to take care of officers and soldiers along the Chanomi creek.

“On March 21, 2014, one of the suspects brought $60,000 (N10.2 million) as part payment for the N20 million pledge, the suspects were immediately arrested for attempting to bribe the Brigade Commander for economic sabotage,” Mr. Atewe said.

He said Mr. Azinta had earlier reported an attempt to bribe him with $30,000 when he was Chief of Staff at the JTF Headquarters in July 2012.

The JTF Commander said the two British suspects, and 12 technicians they hired to drill into the pipeline and connect the hoses to steal crude, were arrested and their tools seized. He said the suspects would be handed over to the Department of State Security Service, SSS, for prosecution.

Mr. Atewe, however, expressed unhappiness that one of the suspects, Joshua Orupere, was once arrested and handed over to the Economic and Financial Crimes Commission, EFCC, for prosecution.

He said Mr. Orupere, a serial offender who is currently on bail for an earlier offence, was apprehended last year when he tried to bribe the same commander who was then the Chief of Staff, JTF.

The JTF boss decried lack of diligent prosecution and appealed to relevant agencies to assist JTF in curbing the menace of crude oil theft.

Nigeria loses tens of thousands of barrels of crude to oil thieves daily.