A team of online sleuths claim to have exposed an attempt to smear the former governor of Nigeria’s central bank.

Lamido Sanusi – who is widely respected in the international community – was suspended from the bank last month after accusing the government of corruption.

A few days later, a number of journalists were surprised to receive an email from an unknown man, Wendell Simlin, which linked Sanusi with the militant Islamist group Boko Haram. The group is believed to have killed thousands of people in a string of brutal attacks since 2009. But a handful of digital activists who obtained the email say it was actually written by one of the president’s aides, after they found his name in a Word document attached. Reno Omokri – social media advisor to President Goodluck Jonathan – is listed as its author in the document properties.

“We just did a simple right click on the document and looked at the ‘properties’,” says Feyi Fawehinmi, one of the team who carried out the investigation. They also contacted a newspaper to cross reference the email with previous messages sent from Omokri himself, and the metadata seems to be a perfect match, they say. 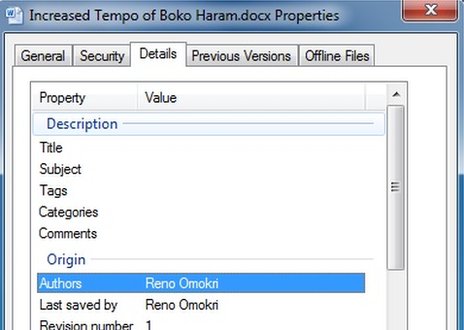 It is possible that the accusations are part of an elaborate attempt to frame Omokri. Carlo De Micheli, an independent security expert, says the evidence can’t be taken as concrete proof – but points out that it would be a bizarre strategy for Sanusi’s supporters to falsify documents incriminating him, and subsequently try to clear his name. BBC Trending has contacted Omokri about the allegations, but he has not responded. He is due to appear as a speaker at a new media conference in Lagos on Friday, and local journalists are keen to press him on the matter.

Sanusi was suspended from the bank by the president after alleging that $20bn (£12bn) in revenue had gone missing from the state oil firm, the Nigerian National Petroleum Corporation.