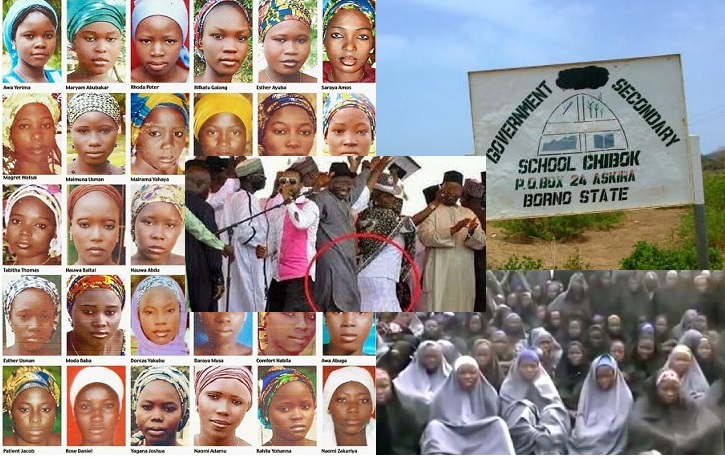 The abducted chibok girls saga always comes to mind when one looked at his grown up daughters in the house.
Stage by stage,from the dimple gesture to a grown up stage of need to be married out.

But in your trace of recollection, you jumped on the scene that the dreaded boko haram members are outside your house, the main purpose of which is to abduct your virgin grown up daughter to an undisclosed location for some lousy, stupid, macho satanist to defile while equally been kicked, molested, slaved, raped 15 times a day and possibly killed, remains the main scene you hate to remember.

While you are still plundering on that scene, you recalled the one you just saw,a possible angry snake bite on your daughters chick, while sleeping on thorns as bed, exposed in the open and sleeping in a bitter cold.

Then, you are about to murmur something, the scene about your daughter turned into suicide bomber quietly infuriates you. You shrugged and struggle to switch your sitting position, ‘NO’ NEVER, you doubly shouted.

The circulated rumoured pictures of the dead female suicide bomber, their being turned into a thousand pieces of littered human flesh with 10 or more dead innocent people within was flashed in the other scene and that was what busted your energy to shout ‘NO’ it can’t happen, for that i can die for my daughter. I have to die first’, you finally calm down.

Then, you where about to put some solace in God, you where then flashed another scene. The dreaded boko members are outside your house shouting for you to surrender your virgin daughters and as bonus your beautiful wife,while you are very sure your destiny is to slaughtered like chicken, dead from the last orzing breath through the cut on your neck.

Then, afterward you were hunted by the inhuman, unfatherly and unmotherly role you played by collecting seven thousand naira in return of your daughter’s freedom,happiness, you then realized how helpless, frustrated, dejected and depressed you have become engineered by your foolish mistake. You then want to die was the scene that reminds you of how stupid and helpless you have become.

Though you haven’t die yet, the Northern elders forum where shown on your screen in one of the scene making some idiotic and selfish statements, that the abducted chibok girls should be return by october ending or jonathan should forget his re-election bid in 2015. What a supportive statement, what an unreasonable bunch of selfish people. You were about to utter something, those bunch of selfish, bad,unpatriotic elements continued in the scene that, «Indeed, we are convinced that most of these conflicts are been engineered to weaken the north politically and economically by interests which intend to exploit such weaknesses for electoral benefits».

Selfish people,why can’t you say president jonathan is a boko haram commander, that he is responsible for killing the poverty stricken people of the north. Ahh! Please help me out, read the statement and decode the meaning. They are foolishly afraid of loosing their oil wells allocate to them to the detriment of the majority of the masses. Their children are in europe and Americas all university tuition fees fully paid, they live in high brow areas in elegance and fashion to the detriment of the popular poverty stricken masses, sweating out our ass to pay our own children school fees. They dont care about us,they only use us and make us their scape goat.

My earlier article that the girls will be return in pieces emanate from the perception that when your daughter is been abducted away from you, from school,from her friends,from the inclusive environment she grew up, then taken to a jungle,raped 15 times a day, scorched by various psychological traumas then and their you believed that your daughter will surely be return in pieces. But recent development have proved otherwise, because the girls are rumoured been returned in pieces in flesh and blood as suicide bomber. Is this not enough to die protecting your beautiful virgin innocent daughters?