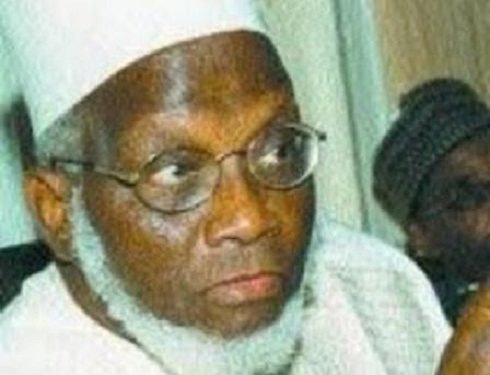 Ahmed Datti is at it again. The Boko Haramist who threatened war (“with the last drop of our blood”) if Islamic banking was not allowed, is again doing what he knows best… inciting northern Muslims to violence. His latest effort was an incendiary diatribe accusing Nigeria’s government and Christians of waging war against Islam and Muslims.

This is the same Islamist rabble rouser who in 2002 instigated Muslims to wage Jihad against Christians in response to an innocuous newspaper article complimenting prophet Mohammed with beauty contestant brides. Not surprisingly, certain Muslims in Abuja and Kaduna went on a murderous rampage.

In October 2001, after Christians in Kano were massacred by hordes of rioting Muslims protesting America’s bombardment of Al-Qaeda/Taliban in Afghanistan in response to 9/11, Datti justified the bloodbath by castigating our federal government:

“the Federal Government was insensitive to the feelings of the various adherents of different faiths, especially Muslims, in announcing its support for the US attempt to apprehend the chief suspect of the recent terrorist attack on America, Osama bin Laden” (Vanguard 17th Oct, 2001).

Note the implicit support of Mallam Datti and his fellow northern Muslims for the late Al-Qaeda leader, Osama bin Laden in their riotous protest. Not surprisingly, Datti was also a buddy and mentor of the late Mohammed Yusuf, former leader of Boko Haram, Nigeria’s Al-Qaeda affiliate.

In 2004 when Boko Haram’s first insurgent incarnate, Nigerian Taliban attacked several police stations, this is what the vile Jihad instigator had to say – “These (Jihadists) are very sophisticated youths. They are not just the trash. I can understand why they did it…”

Given this ignoble track record of inciting and condoning Islamist violence, Mallam Datti’s recent outrageous outburst that Nigeria is at war with Islam and Muslims should not be taken lightly, but must be viewed as another Jihadist battle cry for bloodbath of Aarna (non-Muslims).

We critics of Islam – Islamophobes if you like – are quite familiar with the mendacious penchant of Muslim propagandists to distort the narrative and play victim.

I was taken aback by the sheer effrontery of Ahmed Datti’s patently bogus accusation that Nigeria is at war with Islam, when everyone can clearly see Islamist insurrectionists are waging war against Naija.

At a time when provocative northern Muslims should be hiding their heads in shame for bringing northern Nigeria into the disreputable club of Islamist anarchist hellholes like Somalia, Afghanistan, Syria, Iraq etc; they brazenly fan the embers of religious discord with this unwarranted provocation.

By the way, it’s not only Nigeria’s government that is at war with Islam. America has also been severally accused in her war against Islamist terror. One moment Muslim propagandists would have us believe Muslim terrorists are not representative of Islam, the next moment the howl and protest any punitive action against the terrorists as a war against Islam.

In other words, we non-Muslims are supposed to lie supine and allow Muslim terrorists ride roughshod over us in their violent intolerance, jihadist terror and inordinate hegemonic quest for global caliphate dominance.

Any resistance on our part is tantamount to war against Islam. Any criticism of the obnoxious creed that drives them to perpetrate daily atrocities – without which CNN or AlJazeera news cast would be incomplete – is Islamophobia.

To address Ahmad Datti’s drivel more frontally, can the Sharia leader explain why religious violence in Nigeria is largely confined to the predominantly Muslim North, while the predominantly Christian South is virtually free of such violence?

Islam is not just the number one threat to Nigeria’s continued unity, it is the greatest threat to world peace as it is the commonest cause of conflict around the world – Syria, Iraq, Pakistan, Afghanistan, Israel, Somalia, Mali, Central African republic, Kenya, Tanzania, Thailand, Russia, Philippines, India, USA, Western Europe etc.

Notice the projection. Muslims have basically declared war on the non-Muslim world, which in Islamic doctrine is Dar-ul harb (land of war), but it’s we non-Muslims who resist Jihad that are guilty warring against Islam. That’s right, it’s always our fault. It’s just a coincidence that Buddhists in Thailand/Myanmar, Hindus in India, Catholics in the Philippines, Christians in Nigeria, Central African republic, the West and Russia are all at war with Islam.

And don’t get me started with the bullshit that Boko Haram is not representative of Muslims in our Islamist core North. Kano’s unconstitutional Sharia police has severally publicly destroyed large consignments of alcoholic drinks belonging to non-Muslims.

Am I the only one who sees a meeting of minds between Boko Haram which bombed drinking joints in the same Kano, and Kano’s officially sanctioned beer-bottle smashing Sharia police? Clearly both are on the same page.

In essence Boko Haram arose in our Islamist north because of the already prevailing culture of violent intolerance clearly evident in the aforementioned Jihadist bloodbaths.

Not to forget the numerous smaller Muslim provocations, such as the beheading of Gideon Akaluka in Kano, lynching of teacher Oluwatoyin Olusesan by her Muslim students in Gombe, as well as abduction and forced conversion of non-Muslim children. None of these were mentioned in Ahmed Datti’s Sharia council anti-Christian tirade.

The Taqiyya Muslim propagandist only told one side of the story concerning the second type of religious violence in Arewa i.e. ethno-sectarian conflict between predominantly Christian indigenous northern minorities and Hausa-Fulani Muslims. Ahmed Datti’s Taqiyya conveniently failed to mention that in these tit-for-tat ethno-religious strife, particularly in Plateau – many indigenous Christians were also slaughtered by Muslims.

This is not at all to condone revenge massacres, but to put Datti’s hyped anti-Muslim violence in proper context. Interestingly, in 2001 Mallam Datti himself called for revenge attacks in the North in response to killing of some Hausas in the South west. Retaliation should be targeted at the perpetrators, not their co-religionists or ethnic kin elsewhere.

Historically, several of the Northern middle belt minorities were repeated victims of Hausa-Fulani Jihadist aggression and expansionism. Consequently, some of them have developed a short fuse when it comes to Hausa-Fulani Muslim provocations.

Unfortunately, like obtuse belligerent fanatics elsewhere, our northern Islamist compatriots refuse to learn from such sordid experiences – that if they continue to provocatively push the buttons of we non-Muslims and continue to menace humanity, a devastating anti-Muslim backlash that will totally crush Islam is only a matter of time.

After all globally, we outnumber them five to one, and we are stronger technologically, militarily and economically.

Why More Governors Will Leave PDP – ...