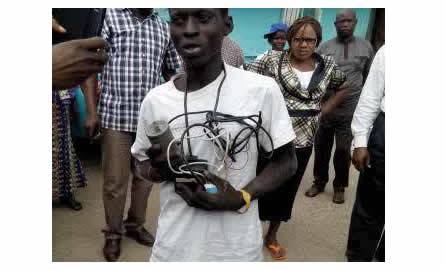 Though he is now in police custody, and his name is being withheld, the man Lagos airport security officials grabbed and detained late Monday has reportedly revealed a widespread Boko Haram plot that has targeted at least a half dozen sites across the city.

In a story reported by both THISDAY and the Punch newspaper early Tuesday, the 22-year old disabled man admitted in a police confession to being part of the Boko Haram plot to destroy key sites at the international airport. He was apprehended Monday with canisters secured around his body and neck, that police say were explosives he was about to detonate.

The man’s movements at the airport created suspicion among the airport security personnel. They then focused their attention on him, and alerted police, which led to his arrest shortly afterwards. The National Airport Management Authority facility at the airport was believed to be the target.

Travelers, police, security personnel, and others at the airport were lucky this time.

They were lucky in because the attempt to detonate the bomb that was attached to his neck and body would have been successful, said police, but for the inability of the explosives to detonate when they were supposed to. In short, it was a glitch in the man’s portable bomb that failed to go off, said an airport security official who spoke off the record to a handful of reporters.

“He was caught because when he tried to set off the explosives, there was a hitch. He (then) ran back to an obscure place (at the airport) to check it out, and fix it,” said the security source.

The source furthered, “his suspicious movement and the frustration evident on his face aroused the suspicion of security operatives attached to National Airport Management Authority.”

What is now slowly emerging are details of a wider plan by Boko Haram to bomb sites across Lagos. It is unclear if the man now in police custody is telling his tale of failed bravado to mislead police and intelligence agents, yet all leads are being tracked down, security and police officials acknowledge.