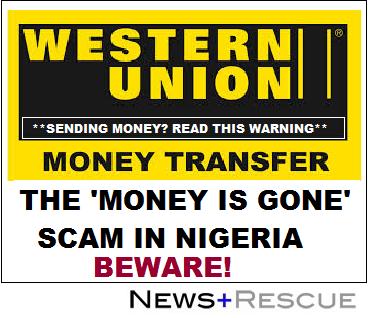 NewsRescue– For those who may be sending money to Nigeria via Western Union, you might want to read this important message first.

NewsRescue confirms an ongoing scam in which your sent money may never reach the intended recipient. We can confirm that this scam has been occurring in Western Union transfers since 2007 at least and Western Union is yet to plug the hole, nor quickly acknowledge this well known happening and make refunds when it does transpire.

Here is the format:

You send money from abroad to Nigeria and get your control digits.

You send these digits to your person in Nigeria, usually Lagos.

The person goes to the branch to collect the money. We have records of this happening at an Oba Akran branch of Guarantee Trust Bank in Ikeja as well as in Surulere bank branches which we have confirmed. It may happen at any bank or branches at any time.

Your person goes to the bank, gives them his Identification and the numbers. They usually delay, let us say for 20 minutes and then tell you the digits are not correct. They may tell you so right away.

You call your contact abroad who contacts Western Union to figure out what the issue is and immediately they call Western Union, they are told that the money was just retrieved by your person in Nigeria.

You keep fighting them, insisting you trust this person and this can not be so; they tell you the person provided correct photo identification and the correct controls and that the investigation is over, they will mail you the details.

They later mail you the details stating that your person did collect the funds.

Thousands of dollars have gone missing in this fashion.

Actual Case from SunNewsOnline Since 2007

“..Brimming with smiles, Kole set out the next day and went to the Lawanson, Surulere branch of Oceanic Bank (a different bank from the one that swallowed Tinuke’s money on Oba Akran). He was informed that his Nigeria International Passport was invalid and was advised to inform his brother.

Immediately Kole called Michael, he was informed by his brother that someone had collected the money at the Ladipo, Mushin branch of another bank altogether. Again it was another branch of the Oba Akran bank. He said: “Michael told me that he had just checked with Western Union and that the money had disappeared. I was so angry. I marched into the premises of the bank and reported the matter to the Bank Manager and a bank staff in charge of the Western Union. They told me that they acted in the bank regulation and had to pay when one Kole Williams came, identifying himself with a driver’s licence and he answered to the number on the transfer, hence they paid him”….

It is a bank inside job. What happens is, when the recipient goes to the bank, they collect his identification, make a copy of it and also get the control numbers and other transfer information. In the few minutes while he waits in the bank, they fax, text, email this information to their fellow conspirator in another branch who logs in to the Western Union panel and punches in your data and makes the withdrawal at that other branch.

Remember, they even have a copy of the recipients original ID which they could have scanned and sent to the email of their fellow thief at the cashing branch, which he puts in the file.

There is no way for Western Union from abroad to detect that this is a fraud, since bank operatives conduct it smoothly, but NewsRescue confirms that they do know this happens, because it has happened numerous times over the years, and if you insist, they will refund your money to you.

It is sad that the money transfer company, with Nigeria being one of its largest markets, has failed to plug this scam and continues to give its customers the rude shock, stress and damage caused by exposing them to this repetitive robbery.

Nigeria’s security department should also have been employed in tracking these cashiers who operate this insensitive scam.

We authentically confirm to you that it was that bank teller cashier who took your digits that scammed you. They are in on it. The number was correct, they only pretended to but never punched it in. Western Union sees the controls punched in only once–at the other bank.

Tips For Your Protection

Never be silent. Give the cashier 3 minutes to confirm the numbers are correct or immediately raise a loud alarm in the bank that the cashier is a thief about to scam you and get a manager involved asap. You may also insist you watch them do the process. Time is of essence, they have partner cashiers at the ready in various banks to extract your money.

Email us if you have been scammed: editor @Newsrescue.com