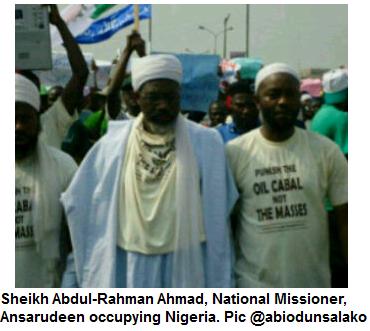 Worried by the spate of indiscriminate bombings by the dreaded  Boko Haram sect, the Ansar -ud-een Society of Nigeria has challenged the Federal Government to unmask the members and sponsors of the sect.

The Islamic organisation disclosed that it had lost no fewer than two of its mosques and scores of members to several attacks by the sect and called on the Federal Government to as a matter of urgency, deploy all its power, resources and intelligence gathering towards revealing and prosecuting whoever that is behind the spate of bombings and senseless killings of innocent souls in the country.

The association while charging the Federal Government to swing into action by taking concrete steps towards prosecuting alleged high profile sponsors of the group, appealed to those behind the attack to stop wasting human lives.

Briefing journalists on the activities to commemorate the 90th anniversary of the organisation, the National President and National Missioner of the group, Alhaji Femi Okunu (SAN) and Sheikh Abdul Rahman Ahmad, charged the Federal Government to do all within its power to unravel those behind Boko Haram.

They described the sect as a collective embarrassment to all people of faith and good conscience, sincere Muslims and Christians and reasonable people across the country.

Ahmad said: “If you ask us what Boko Haram want, we don’t know because we do not know what they are fighting for, we don’t know their antecedents we do not know their teachers. I expect government of the federal republic to be able to come and answer these questions about Boko Haram, they have the wherewithal to uncover, the secret and the intelligent service to unravel the identity of Boko Haram. Why is this so called religious group that is pretending to force Islam on everyone is killing Muslims, destroying mosques . In Southern Zaria, two Ansaru-Ud Deen mosques were the target of the so called Boko Haram. One of our mosques in Kafachan was bombed while worshippers were praying. This is what is done by supposed Muslims, I lost a university classmate of mine to Boko Haram not long ago.

“These people are killing Muslims, killing children destroying schools. Up till now, there is no high profile arrest or trial of Boko Haram suspects. So, who is Boko Haram? Who are their sponsors? What do they really want? If they  are truly Muslim group? Why are they killing Muslims, destroying mosques?

“These are questions the federal government must answer”.

Also speaking, Okunu said only Almighty Allah takes lives at will, no group or individual is allowed to do so, adding that Boko Haram’s action negates the tenets of Islam which is rooted in peace, intellectualism and productive research.

He added that for 90 years, Ansar –ud-Deen Society of Nigeria has contributed to the socio-economic development of Nigeria because of the conviction of Islam to positively impact on the society, adding that the society has trained hundreds of thousands of Nigerian Muslims and Christians through schools established by the organisation.

The former Minister of Works added that he had also lost several friends from northern part of the country to the sect’s attack, stressing that the sect is much more against Muslims than what Nigerians will think.

Harping on the anniversary, Okunu said machinery has been put in motion for its 90th anniversary celebration with a view to consolidating its achievements in educational development and propagation of Islam.

Alhaji Femi Okunnu at the press conference said the organisation which was incorporated under the Land Ordinance of 1924 was formed under the objectives of education and promotion of Islam.

Alhaji Okunu said: “These objectives have been pursued vigorously from the inception of the Society, it has not relented in its efforts at propagating the education of Muslim youth at all levels of education.

“The Society initially called the “Young Ansar-Ud-deen” was founded on 21st December 1923 in response to lack of western education opportunities for Muslim children and youth at that time which was strongly felt within the Muslim community in Lagos.

“The society started with the establishment of primary and secondary schools all over the country numbering 240 with the Ansar-Ud-deen School, Alakoro in 1929 as its flagship. It also established a teacher training college at Otta to train teachers.

“I recently directed that all branches should be encouraged to establish more creche, primary and secondary schools in their domain. Alhamdulillah, branches have responded positively to this clarion call.

“It is also heartwarming to inform you that the proposed Summit University at Offa has been seriously upgraded in terms of infrastructure and all conditions for issuance of licence have been complied with by the Society”.