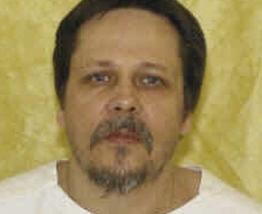 (CNN) — Ohio inmate Dennis McGuire appeared to gasp and convulse for roughly 10 minutes before he died Thursday by lethal injection using a new combination of drugs, reporters who witnessed it said.

McGuire was convicted in 1994 of the rape and murder of 22-year-old Joy Stewart, who was seven months pregnant. Her relatives were at Southern Ohio Correctional Facility in Lucasville to witness his death, according to tweets from television reporter Sheila Gray.

She said McGuire, before the drugs took effect, thanked Stewart’s family for a letter he apparently received.

“To my children, I’m sorry. I love you. I’m going to heaven and I’ll see you there when you come,” McGuire reportedly said, according to CNN affiliate WDTN.

Columbus Dispatch reporter Alan Johnson said that the whole execution process took 24 minutes, and that McGuire appeared to be gasping for air for 10 to 13 minutes. Read on CNN